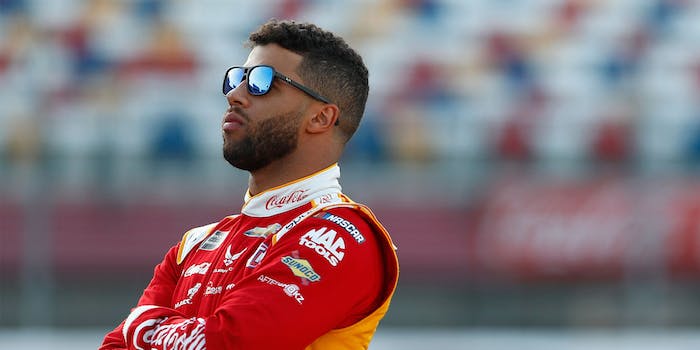 NASCAR has launched an investigation after a noose was discovered in the garage stall of Bubba Wallace, the organization’s only Black driver.

The noose was found at Talladega Superspeedway in Lincoln, Alabama, on Sunday, less than two weeks after NASCAR banned the Confederate flag from being shown at its events.

“We are angry and outraged, and cannot state strongly enough how seriously we take this heinous act,” NASCAR wrote in a statement on Monday morning. “We have launched an immediate investigation, and will do everything we can do identify the person(s) responsible and eliminate them from the sport. As we have stated unequivocally, there is no place for racism in NASCAR, and this act only strengthens our resolve to make the sport open and welcoming to all.”

Wallace has received equal parts praise and slander over the past two weeks for convincing NASCAR to ban the Confederate flag from its events. Unsurprisingly, the latter group was quick to question the legitimacy of the noose found in Wallace’s garage stall.

Some Twitter users—primarily far-right trolls—likened the incident to the case of Empire star Jussie Smollett, who claimed in 2019 that two men wearing MAGA hats physically assaulted him and used racist and homophobic slurs toward him. (Smollett was charged with disorderly conduct and making “four separate false reports” in February.)

These racist naysayers caused “Jussie Smollett” to trend on Twitter on Monday morning. However, many of the people tweeting about Smollett were explaining how asinine it was to assume Wallace was also fabricating his story, based purely on the fact that both men are Black.

“The comments comparing Bubba Smith to Jussie Smollett actually perfectly demonstrate systematic racism at work,” Twitter user @spartandog97 wrote. “Marginalized communities are always assumed to be liars, and any violence perpetrated against them was falsified.”

Many Twitter users also expressed their support for Wallace, causing #IStandWithBubba to take off. Fellow NASCAR drivers and other professional athletes showed their solidarity with Wallace on Twitter.

“Sickening! @BubbaWallace my brother! Know you don’t stand alone!” LeBron James wrote. “I’m right here with you as well as every other athlete. I just want to continue to say how proud I am of you for continuing to take a stand for change here in America and sports! @NASCAR I salute you as well!”

Wallace issued his own statement via Twitter last night.

“Today’s despicable act of racism and hatred leaves me incredibly saddened and serves as a painful reminder of how much further we have to go as a society and how persistent we must be in the fight against racism,” he wrote. “This will not break me, I will not give in nor will I back down. I will continue to proudly stand for what I believe in.”