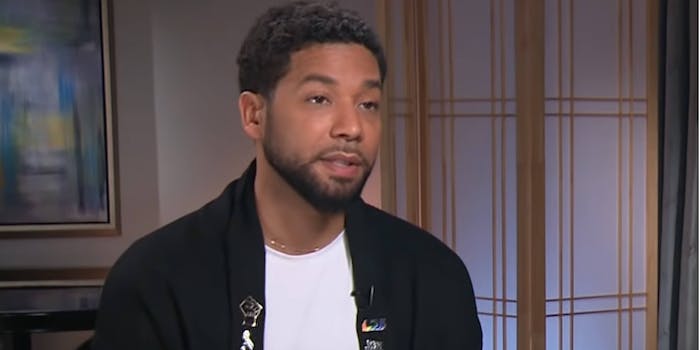 The indictment charges Smollett with making false reports about a hate crime to police.

Empire star Jussie Smollett has been charged with six new felony counts of disorderly conduct by a special prosecutor in Chicago.

According to The Hollywood Reporter, Smollett was indicted by special prosecutor Dan Webb, who was appointed in August to further investigate the case. According to a statement released on Tuesday, the indictment charges Smollett with making “four separate false reports” to Chicago police after a January 2019 incident in which Smollett claimed he was the victim of a hate crime, and that two men wearing “Make America Great Again” hats physically assaulted him and called him racist and homophobic slurs.

Two men later revealed that Smollett had paid them to carry out the attack. The actor was charged with 16 felony counts, but they were suddenly dropped in March 2019, and Smollett maintained his innocence. Webb was initially named last summer to investigate why the charges were dropped, and what part Cook County State’s Attorney Kim Foxx’s office played in it.

Smollett is set to be arraigned on the new charges on Feb. 24. His attorney, Tina Glandian, said in a statement that the charges are “clearly all about politics not justice,” citing the current State’s Attorney election.