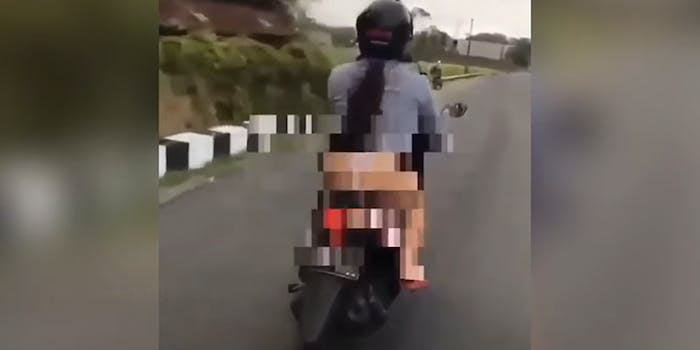 The video could violate Indonesia's laws against exhibitionism.

Indonesian police are currently investigating the subject of a viral TikTok that showed a person on the back of a motorcycle flashing their underwear to the camera. The suspect could now possibly face charges for violating pornography laws, according to Coconuts Jakarta.

The TikTok uploaded earlier this week had been viewed over 2 million times by Thursday, before being taken down. The video was reshared on multiple social media accounts and outlets.

The video shows two motorcyclists riding on empty roads as a passenger sitting lifts up a black skirt to reveal their underwear and backside multiple times. The rider’s long hair is visible in the 19-second clip, but their face is covered by a helmet.

According to Kompas, police later confirmed the passenger was actually a 32-year-old male called by the nickname Mbak Ida. Another suspect, a 24-year-old male identified by the inital “R,” is allegedly recorded the incident.

One Instagram reposter warned Mbak Ida of his actions, asking him to clarify the incident to avoid repeated endangerment to followers or viewers who may emulate the video.

“‘Come on Mba Ida, clarify your viral video so that the netizen does not misunderstand and no one will follow in your footsteps serving (dangerous),” they wrote.

In a statement, police said they are investigating the incident to determine criminal action. The person seen in the video is allegedly committing exhibitionism, which is a criminal offense in Indonesia, according to Coconuts.

“We are investigating this, determining whether there is a criminal element to this or not. Once that’s determined, we will try to identify the suspect,” Magelang Police Chief Nugroho Ari Setyawan stated.