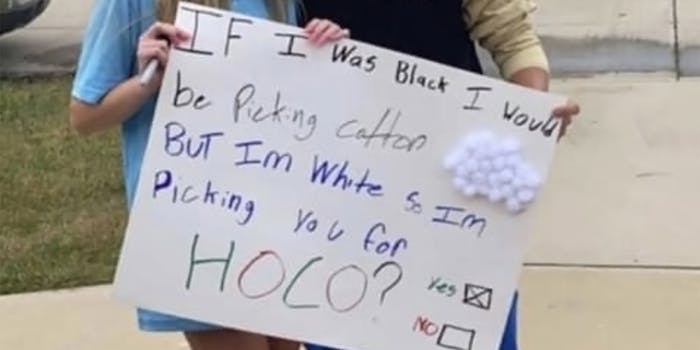 ‘It was the African-American boy’: Mother pins blame on Black student after her daughter receives backlash for racist homecoming sign

'Please know that we have diversity in our own family and believe that all lives matter.'

A Kansas woman is reportedly pinning the blame on a Black student after her white daughter received backlash for posing with a racist homecoming sign for a social media photo.

The poster reads: “If I was Black, I would be picking cotton, but I’m white, so I’m picking you.” The poster incorporates several cotton balls and a check box to choose “yes” or “no.”

According to KSHB, a letter was sent to parents by Olathe South High School regarding the racist homecoming poster and “said the district was made aware of the ‘offensive post circulating on social media.'”

“I felt it was important to share that we are working to thoroughly investigate the situation and contact all parties involved, including student guardians,” Olathe South Principal Dale Longenecker wrote. “At Olathe South and in the Olathe Public Schools, we are committed to creating an inclusive and safe environment for ALL our students.”

“The type of behavior displayed in the social media post does not meet the expectations of our core values. Any behavior like this will be immediately addressed in accordance with our Student Code of Conduct,” the letter continued.

The mother of the young woman in the photo, Rhonda Windholz, sent a statement to KSHB defending her daughter, and instead placed the blame on a Black student.

“Caught up in the excitement of being asked to her first ever homecoming, our daughter held the sign that was given to her. It was only after actually comprehending the situation that she realized what was happening. She blatantly said no!! By then, it was too late,” she added.

In her statement, she also said that “We have diversity in our own family and believe that all lives matter.” She said the family is now on the receiving end of death threats and that people told her daughter to die by suicide. She called the matter a “misunderstanding.”

“The response to this misunderstanding has caused much confusion and pain for many. We sincerely apologize to all who are offended,” she said.

People online are now criticizing Windholz for trying to blame a Black student for the poster, with one saying: “She really blamed this on a black student??? Rhonda Windholz you should be ashamed!!!!”

According to KCUR 89.3, the poster involved another student from St. James Academy, a Catholic high school in Lenexa, Kansas. “We’re looking at other opportunities to make sure all of our students are supported as we walk through this,” said Shane Rapp, principal of St. James, in a public statement. “We did address our student body this morning as well, just kind of talked about the incident and what our role is as Catholics in understanding racism and addressing it, and speaking up when we see something that’s not right.”

The Daily Dot reached out to Windholz and Olathe Public Schools administration.