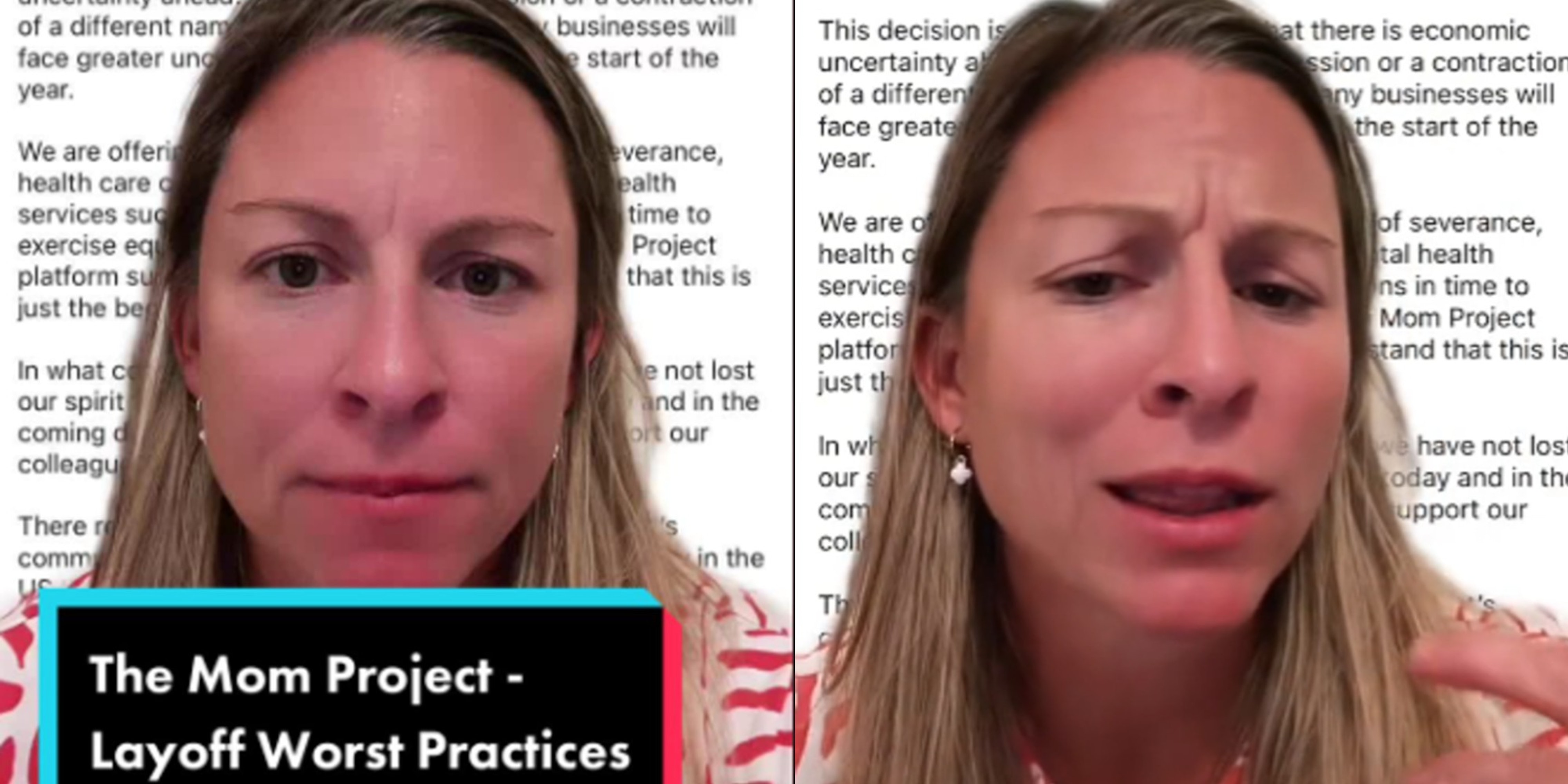 'Just have a heart.'

In corporate America, jargon is king. Professionals often attempt to communicate in a roundabout way so as not to come off blunt or offensive. While it’s easy to laugh at buzzwords and “office speak” there are situations where the implementation of such “professional” verbiage can come off as insensitive.

In a now-viral TikTok posted by @managermethod, she highlights a statement released by The Mom Project and calls it out as an example of “why so many people hate corporate America and ‘corporate speak’.”

She states, “Why do so many people hate corporate America and corporate speak? Look at this example. The Mom Project, which is a for-profit like Monster.com for women, today announced that they were laying off 54 team members. They put this post on LinkedIn. But you will not see the word ‘layoff’, what you will see is a bunch of corporate speak on here. Saying 15% of our team will not have ‘go-forward roles’ at the company. Like, I can’t, just talk like a normal person.”

She then shows a Twitter post from The Mom Project that reads: “Are you feeling uninspired in your current career? Taking a break from work is essential during times like these. Read more to learn the signs of burnout and how truly unplugging from work can allow you to return to the office feeling refreshed.”

@Managermethod continued, “Whoever put this ill-timed post about taking a break from work….no. Take it down. Don’t. Just have a heart. This is why people so much hate corporate America.”

A LinkedIn search of The Mom Project brings up tons of posts from users on the platform lambasting the company’s statement along with its founder, Allison Robinson. Many LinkedIn users criticized the company’s decision to not even phone its laid-off employees. As of publication, the original post that was referenced in the aforementioned TikTok is still up on its LinkedIn page.

“You did layoffs over email? I get the wfh factor, but you couldn’t have 1:1 conversations over the phone or Zoom with each person impacted? When I was a senior exec and CEO, I personally flew to people’s cities to let them go in person. I didn’t enjoy it, but it wasn’t about me,” Denise Conroy wrote.

“Seeing what my wife has dealt with as a working Mom, I really respect the mission of the Mom Project. However, this entire post reeks of ugly corporate speak. First of all, why use the term “go-forward roles”…..just say what it is – its a layoff,” another user wrote.

A third shared, “Sadly, the company’s reputation has been significantly tarnished by the announcement of layoff/firing notifications by turning off company software access to affected employees. Unfortunately, the message above is a double-down on the poor behavior that was reported in the numerous layoff posts earlier today. I’m not sure why this disappoints me so much but it does.”

The Daily Dot has reached out to @managermethod on TikTok and The Mom Project via email for further comment.