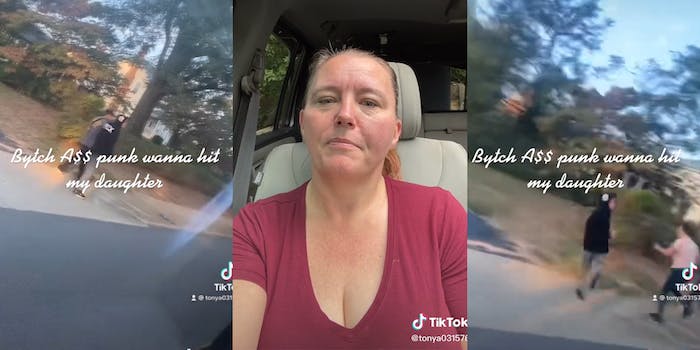 'It's the mamas that get crazy when you mess with their babies.'

A viral TikTok video shows a mom chasing down a young man who allegedly hit her daughter.

TikToker @tonya031576 posted the footage, which has been viewed over 1.2 million times. The overlay reads: “Bytch A$$ punk wanna hit my daughter.”

It features her in a car slow-rolling up on two young men who are walking. The mom wastes no time and runs up to the young man in the hoodie. He seems to want no action and ends up sprinting away from her.

The mom chases him down the road, and the video ends. The clip is set to “Move Bitch” by Ludacris.

In a follow-up video, the TikToker says that she and her daughter went to court in apparent litigation against the young man. She alleges that the young man and his mother, who was served for the court date, did not show up and had his case continued by the judge for later in the month.

In the comments section of her first video, viewers are siding with the mother and sharing their praise for her.

One of the top comments reads: “People always talking about dads. It’s the mamas that get crazy when you mess with their babies.”

The Daily Dot has reached out to @tonya031576 for comment.