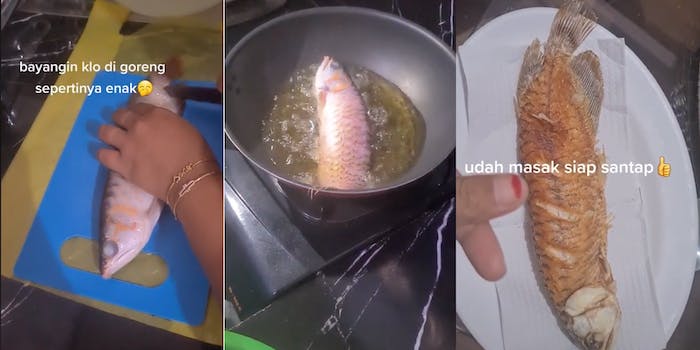 The video shows her scaling and seasoning the expensive fish.

An Indonesian woman reportedly fried her husband’s expensive pet fish to teach him a lesson about laziness. She documented the act in a video on TikTok, where it’s garnered 7.1 million views.

In the video, she shows her husband’s pet Asian Arowana fish, which is reportedly one of the most expensive fish in the world. The fish itself is illegal to trade in the United States in most cases because it is an endangered species. It is native to Southeast Asia.

When traded, the Asian Arowana will reportedly sell for anywhere between $150,000 and $300,000, based on its breeding and variety.

The video, shared to TikTok on Oct. 8 by Mia Kurniawan (@miakurniawan01), shows her scaling and seasoning the expensive fish before deep-frying it to teach her husband a lesson about laziness.

In follow-up videos, Kurniawan reportedly said her husband forgave her for cooking the pricey fish and is looking to purchase a new Asian Arowana.

As Mashable Southeast Asia noted, this story recalls a January post of a woman turning her multiple dead pet Koi fish into soup. In that case, the fish all accidentally suffocated after their water supply wasn’t shut off, resulting in too little oxygen concentrated in the water.

This is also far from the only time someone has fried up an Arowana, either. In 2020, a man came home to find that his father fried up his expensive pet.