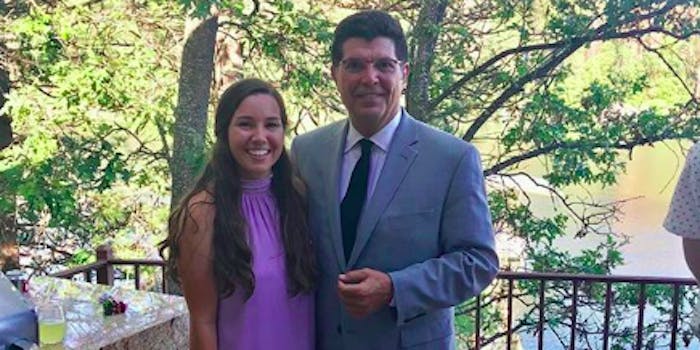 Mollie Tibbetts’ father begs for ‘some decency’ in op-ed

In an op-ed in the Des Moines Register on Saturday, Mollie Tibbetts’ father Rob Tibbetts responded to attacks on immigrants made in his late daughter’s name.

Tibbetts lamented that some have “chosen to callously distort and corrupt Mollie’s tragic death to advance a cause she vehemently opposed.”

Mollie Tibbetts went missing during a jog near her home in Brooklyn, Iowa, on July 18. Her body was found in a cornfield on Aug. 21. An autopsy showed that the 20-year-old died of “multiple sharp force injuries,” which could include stab or chopping wounds.

Cristhian Bahena Rivera, 24, is accused of murdering Mollie Tibbetts and led police to her body. After initial confusion, it was determined that Rivera is an undocumented immigrant from Mexico.

“I encourage the debate on immigration; there is great merit in its reasonable outcome,” he continued. “But do not appropriate Mollie’s soul in advancing views she believed were profoundly racist.”

Tibbetts, who called his daughter his “best friend,” said that Rivera “is no more a reflection of the Hispanic community as white supremacists are of all white people.”

“Justice in my America is blind,” Tibbetts continued. “This person will receive a fair trial, as it should be. If convicted, he will face the consequences society has set. Beyond that, he deserves no more attention.”

Politicians and pundits (both professionals and of the Twitter variety) used Mollie Tibbetts’ murder as an argument against immigration.

“At her eulogy, I said Mollie was nobody’s victim. Nor is she a pawn in others’ debate. She may not be able to speak for herself, but I can and will. Please leave us out of your debate,” Rob Tibbetts wrote.

Further, “to knowingly foment discord among races is a disgrace to our flag. It incites fear in innocent communities and lends legitimacy to the darkest, most hate-filled corners of the American soul. It is the opposite of leadership. It is the opposite of humanity. It is heartless. It is despicable. It is shameful,” he added.