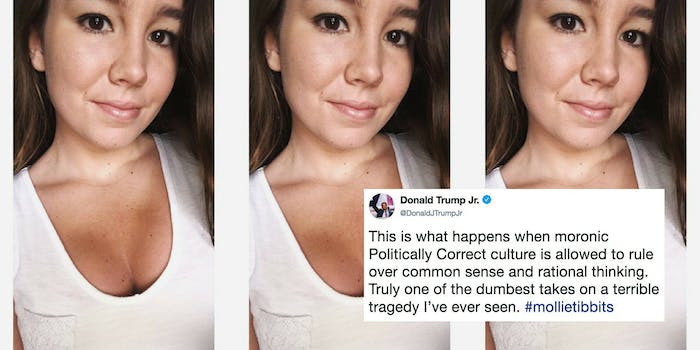 It must be pretty difficult to spot toxic masculinity when you're surrounded by it.

Donald Trump Jr. doesn’t believe that the death Mollie Tibbetts, the 20-year-old University of Iowa student whose body was found on Tuesday, has anything to do with this country’s historical precedent of men resorting to violence when their advances are rejected by a woman.

Nope, to Trump Jr., toxic masculinity played no role in Tibbetts’ death. Blame Tibbetts’ death on the fact that her attacker is undocumented, and not because he was an angry man who didn’t respect Tibbetts’ boundaries, Trump Jr. has seemed to say.

This is what happens when moronic Politically Correct culture is allowed to rule over common sense and rational thinking. Truly one of the dumbest takes on a terrible tragedy I’ve ever seen. #mollietibbits https://t.co/IkNYWQhmDG

On Thursday, Trump Jr. expressed such ideas in his response to a tweet from Democratic strategist and Bernie Sanders‘ former national press secretary Symone Sanders. Sanders had previously tweeted stating that Tibbetts, who was out for a run when she was followed by her attacker, was murdered because she had “told a man to leave her alone” instead of being OK with a stranger jogging alongside her. Her killer just happened to be undocumented, Sanders wrote, and her death had nothing to do with border security.

“This is about toxic masculinity. Mollie Tibbetts lost her life [because] a man couldn’t take her saying no. Full stop,” Sanders said.

Toxic masculinity, as defined by the Representation Project, is seen in a culture that values “‘masculine traits’ such as dominance, aggression, and control over ‘feminine traits,’ like empathy, care, collaboration.” Its manifested in the ways men are told to behave in order to prove their masculinity and define their worth as men.

“…It is problematic for people to characterize an entire community based off the actions of one person. The majority of mass shootings in America are carried out by white men. So are we going to round them all up?” Sanders continued. “That logic is asinine, archaic and flawed.”

Trump Jr., upon seeing Sanders’ tweet, made it clear that he could not be more in disagreement, calling the idea that toxic masculinity somehow involved in Tibbetts’ death “one of the dumbest takes on a terrible tragedy” he’s seen. Sanders’ assertion was what happened when “moronic politically correct culture is allowed to rule over common sense and rational thinking,” Trump Jr. wrote.

Sanders isn’t alone in feeling that the narrative around Tibbetts’ death is being wrongly politicized, framed as an issue of national security instead of violence against women, as if what happened to Tibbetts isn’t indicative of a larger national problem involving harassment and assault. Many have asserted that, based on her attacker’s statement, Tibbetts did not want to engage with a man attempting to engage with her. However, her attacker’s documentation status is superseding any sort of analysis looking at why it was he felt like she had a responsibility to engage with him, that she owed him time just because he was following her.

Of course, this is our assumption based off what her attacker told police—that he started running after her, and that after she threatened to call the police, he blacked out and realized he had put Tibbetts, bleeding, into the trunk of his car. According to a preliminary autopsy, Tibbetts died after “multiple sharp force injuries.” There could have been additional things Tibbetts did to protest, to indicate to her attacker that she did not want to be followed and did not want to stop for him.

But we do know that her attacker did not murder her because he’s undocumented, and for no reason related to toxic masculinity, as Trump Jr. wants to assert. To think so would be to ignore the frequent violence women face from partners and strangers who are American citizens, to ignore the women who have been murdered by vengeful boyfriends, husbands, and acquaintances for saying they’re not interested in them, romantically or otherwise. It would also ignore how Trump Jr.’s mother once said her husband, Trump Jr.’s father, sexually assaulted her, as tens of women have also claimed.

Toxic masculinity is what you have lived & breathed since birth … it is not at all shocking that you don't see it for what it is.#TipOfTheDay https://t.co/r9uZ1axL5T

DTJ's mansplaining a tragedy to fit his daddy's campaign narrative is toxic masculinity at its finest. so meta its almost funny. https://t.co/GuFDMST06Y

Not surprising he defends his "grab them by the pussy" father. Sorry, but @SymoneDSanders is right on this, you & Trump's base have always used tragedies for conservative political agenda. Why can't we teach men that no means no? It's not like Rudy's truth isn't truth, no is no. https://t.co/vxtbC2FijO

Your mother said your father raped her and you sided with him. https://t.co/0AoefR1P2E

Sanders later responded to Trump Jr.’s response, restating that toxic masculinity is a thing and she will not be “bullied or intimidated.”

It doesn’t matter whether an attacker is undocumented or an American-born citizen. This culture of expectations of and resentment against women does not discriminate. Citizenship does not make a person nonviolent.