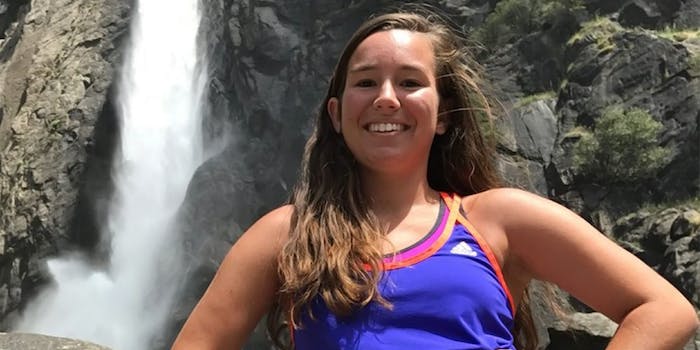 These far-right voices play into the most racialized fears of the Twitter age.

After Cristhian Bahena Rivera was charged in the death of University of Iowa student Mollie Tibbetts on Tuesday, anti-immigrant trolls took to Twitter to harass the dead woman for her criticism of President Donald Trump’s immigration policies.

The barrage of offensive tweets is a distillation of a political culture in which conservative victories hinge on—and are in fact based on—”owning” liberals. Even dead ones.

When U.S. Ambassador Nikki Haley spoke to a group of high school students in July, she cautioned them against this kind of tactic; Breitbart promptly accused her of “scolding” the students. Breitbart also has a sticker that reads, “Safe spaces are for snowflakes”—the idea being that weak, whiny liberal “snowflakes” get “triggered,” and that it’s now both satisfying and essential to one’s identity as a conservative patriot to mock them for it.

It’s the same mindset that pushed followers of Alex Jones to harass the families of Sandy Hook victims until they had to leave their homes.

From this extreme viewpoint, Tibbetts’ death at the hands of Rivera, whose immigration status seems to indicate that he’s undocumented, serves her right for holding liberal views. Tweets about the supposed irony of the situation fill the thread. But ironic situations are marked by humor, and there’s none here.

Tibbetts is the kind of victim who Americans turn into news cycles: white, pretty, high-achieving, kind. She was a small-town college student with a boyfriend and parents who love her. Purity and innocence is ascribed to these kinds of women when they are brutalized.

But despite the qualities that made her so, her family and loved ones have had to face mocking and hateful tweets since Rivera’s name was released in a press conference on Tuesday.

On July 16, Tibbetts tweeted that Trump’s wife Melania is an immigrant, and the replies are shockingly cruel. User @therealrodg1 tweeted, “Looks like an illegal one took you u [sic] out.” User @chrisd2019_v2 tweeted a meme featuring DJ Khaled surrounded by phrases including, “I’m a fool,” and, “I played myself,” with “Mollie Tibbetts” written over Khaled’s face.

Looks like an illegal one took you u out

It’s a shocking layer on top of the victim-blaming that women already face. A rape victim’s choice of clothing is often questioned, for example, or why a woman would go out on a jog by herself, as opposed to why men kill women who reject them.

Local authorities refer to Rivera as undocumented, but his attorney has disputed those claims. He was recently found to have used a false ID and Social Security card to get a work permit. The Daily Dot has reached out to Immigration and Customs Enforcement to verify his immigration status.

This horrific event plays into the most racialized fears of the Trump administration. Trump kicked off his campaign by calling Mexicans rapists and murderers and promising his supporters that he would build a wall along the southern border. He trotted out families who lost loved ones to violence at the hands of undocumented immigrants in June in an attempt to shift attention away from the family separations occurring at the U.S.-Mexico border because of his administration’s policies.

In the same way, trolls who use Tibbetts’ social media presence to advocate for a border wall, or to attack liberals at large for their views on immigration, exploit her death and leave no room for mourning or questioning the real reasons she was killed.