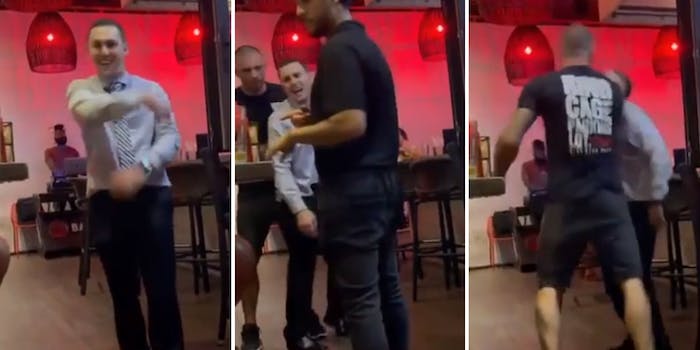 ‘I was scared for my life’: MMA fighter claims ‘self-defense’ after knocking out allegedly racist bar patron

'Bad decisions are made every day.'

A viral video has emerged showing MMA fighter and kickboxer Joe Schilling knocking out a drunk bar patron in what he claims was “self-defense.”

The video was posted to Twitter and Reddit’s r/ActualPublicFreakouts page, with differing opinions of what occurred. It’s not clear where the event took place.

Schilling is shown walking past a drunk bar patron standing in the way. As the 2013 Glory Kickboxing Middleweight Champion and former Bellator fighter walks past him, the patron says something to the 37-year-old athlete then fakes a punch toward Schilling, which was a costly error. Schilling swiftly puts a three-piece, no sides or sweet tea, onto the drunk patron’s head.

“Self-defense is apparently not what this country is about anymore,” Schilling wrote in a deleted post, per MMAFighting.com. “Don’t trip; I got the video. Love you guys; thanks for the concern and support during my life-threatening experience. Big shout out to The Yard Muay Thai for preparing me for this life-threatening situation.”

In another explanation captured by @Beyond_Kick, Schilling states:

“Little context…this guy’s rapping like an idiot. The busboy, who happens to be black, walks by, and this idiot bumps into him and screams out, ‘Me and broke [N-word], we don’t get along.’ The busboy was seriously offended but doesn’t want to lose his job. As the night goes on, this clown starts looking at me…I go outside to smoke; as I’m walking back, he bumps into me. I put my hand out to catch him, he immediately says sorry. You can see me nod my head like cool. Then he realizes it’s me, the guy he’s been rapping at all night, and he yells, “hey.” I turn around, and he flexes on me….bad decisions are made every day. The busboy and DJ came up to thank me. As you can see from this video, when he flexed on me, I was scared for my life and simply defending myself against the evil in this world.”

Whether Schilling, a trained professional fighter, was afraid for his life has some folks doubtful. Nonetheless, people who claimed to know the bar patron expressed gratitude to Schilling after seeing the video.

An unnamed woman contacted Schilling via Instagram direct message, saying the drunk bar patron “used to physically abuse me on a regular basis.”

“I’ve been waiting eight years for karma to hit him straight in the face,” she allegedly says.

Another message said that the man was “physically abusive” to his girlfriend and “absolutely horrible to other women.”

However, Schilling could have a potentially severe legal predicament on his quick hands should the patron pursue a civil case.

The Daily Dot has reached out to Joe Schilling for comment.