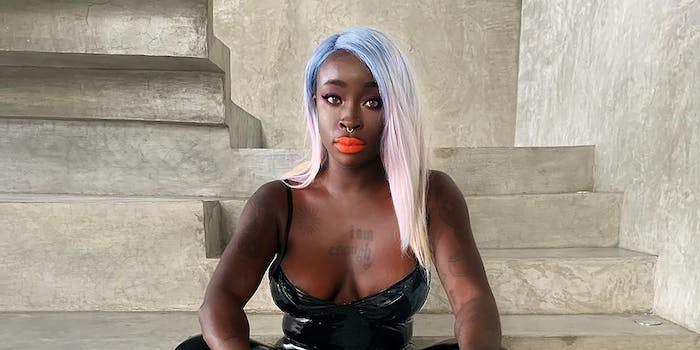 'Mistress Velvet is an icon.'

Mistress Velvet’s death was announced on one of their Instagram accounts on Sunday. The cause of the death was not clear at the time of publication.

“Mistress Velvet is an icon. Their life as an African Feminist and Revolutionary Communist brings us closer to Their fierce vision of [sex work] and Trans Liberation,” read a part of the Instagram tribute.

The post also called to honor their life journey through “decriminalizing [sex work], demanding reparations, and fighting for Black Liberation.”

Mistress Velvet’s story about converting their white cis male clients’ perceptions and, in some cases their journeys, sparked fascination among many.

Over time, however, Mistress Velvet began to incorporate Black feminist theory teaching as part of the role, “as a form of reparations,” they told HuffPost.

Soon, their clients were observing themselves and their role as white cis men in America. One client even started an organization catering to Black single mothers.

“Just allowing them to be submissive doesn’t always allow for the more drastic shift in the framework and thinking that I want,” Mistress Velvet said at the time.

“So I have to bring in my girls, like Audre Lorde and Patricia Hill Collins, and make these men actually read about black feminism,” they added. “Then, it’s moving from them simply fetishizing black women, to realizing: This is a systemic issue I’m contributing to by the virtue of being a white man and being rich.”

In March, they announced on Instagram that they were taking some time off as they were going through a divorce.

The love and support for Mistress Velvet from their followers was evident through the tributes that poured in on social media following the announcement.

“I was literally in shock at this beautiful creature standing before me, recognizing ME while I was in awe of them and the beautiful they contained and radiated,” wrote the user. “I wish that I had got to engage with them more as I begun to get involved with [sex work], and they left a mark on my heart that will be there forever.”

“I met them when I connected with them to do a workshop while I was working at the Network,” wrote another user. “We became fast friends, mutual crushes, and co-conspirators organizing against [domestic violence/sexual violence] nonprofit carceral feminisms.”

Many on Twitter shared how Mistress Velvet’s work inspired them.