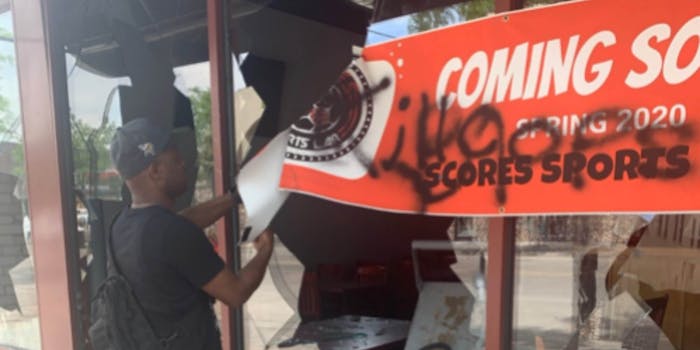 'My business can be rebuilt but his life cannot be regained.'

A GoFundMe set up for a sports bar destroyed during the Minneapolis riots has raised over $100,000.

Black entrepreneurs firefighter KB Balla and his wife Twyana were all set to debut their new venue, the Scores Sports Bar, when the coronavirus lockdown interrupted its launch.

Just as stay-at-home measures were beginning to lift, the murder of George Floyd brought another wave of devastation to the couple’s family, business, and the community.

The GoFundMe page started to help with the rebuilding of the establishment states that the bar was “looted, vandalized, and destroyed” on Wednesday.

On Friday, a follow-up post shared that the sports bar had been “completely burned down” during the night.

“Hi Everyone, Just a quick update. The campaign amount will be updated. The building and my business was completely burned down last night,” KB wrote. “I am devastated but I know something positive will come out of all this.”

Even KB in his optimism did not expect the outpouring of support that came in.

The GoFundMe goal of $100,000 was swiftly met and surpassed.

KB later posted a heartfelt thank you for all of the support sent to his family, and in a show of solidarity extended his condolences to the Floyd family.

“I would just like to start by saying the amount of gratitude in my heart right now is outweighing the sorrow and heavy-heartedness I feel. Yesterday, I was able to share my story and the outpour of financial, physical, and emotional support has been overwhelming,” he wrote. “As I think about my losses, I also want to extend my condolences to the Floyd family…My business can be rebuilt but his life cannot be regained,” he stated.