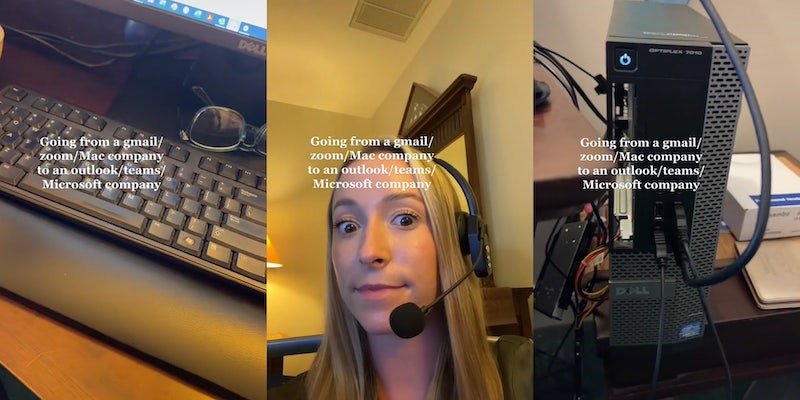 ‘Why does it look the same as when I used it in the 90s’: Worker goes from a Gmail and Zoom office to new job that uses Microsoft Teams, sparking debate

'Teams is so much better than zoom it’s not even comparable.'

In a viral TikTok video, a woman documents the switch from an office that uses Gmail, Zoom, and Apple products to her new job that uses Microsoft Teams and other Microsoft products, sparking debate about different work interfaces in the comments.

“Going from a gmail/zoom/Mac company to an outlook/teams/Microsoft team,” the text overlay reads, as popular audio “What is Dis Huni” plays in the background.

User Joanne Shaw (@joanneshaw70) shares a wide-eyed expression and reveals her new office space. The video features clips of her Dell desktop computer, an external webcam, a black computer mouse, and the icons for Microsoft software, among other items.

“All jokes I’d take teams over my toxic old job any day,” Shaw captioned the video.

The video was viewed 80,000 times and sparked division between users who use Apple, Zoom, and Google products and those who use Microsoft and non-Apple computers, like Dell or HP.

“Me a Mac user working for a windows using company. why does it look the same as when I used it in the 90s,” one person wrote.

“Microsoft has a lot of great functions but it just feels so CLUNKY and less streamlined,” a second said.

“It’s the computer missing the disc drive and side panel for me,” a third commented.

Others noted that they prefer Microsoft software, like Teams and Outlook, for work.

“Teams is so much better than zoom it’s not even comparable,” one said.

“I used to work with gmail but i love teams better. I just use my personal Mac at work bc those hp monitors are JAIL,” a second agreed.

“Gmail was built for personal use, outlook is objectively better for business use,” a third wrote.

In response, several viewers were shocked, while others shared their own companies’ technology.

“Literally floored that there are people out there that prefer outlook and teams??????” one commented.

“My company is elite. It’s a Teams Outlook MacBook company,” a third said.

In order to calm the debate in the comments, Shaw commented that the video was a joke, “Y’all gotta RELAX this is a joke, laugh haha funny!”