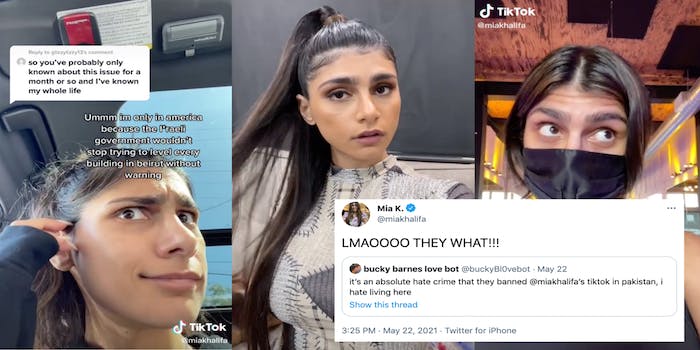 "Shoutout to Pakistan for banning my TikTok account from the country."

Former adult star Mia Khalifa is biting back on Twitter after fans told her that Pakistan banned her TikTok account.

“Shoutout to Pakistan for banning my TikTok account from the country,” Khalifa tweeted on Saturday. “I’ll be reposting all my TikToks on Twitter from now on for my Pakistani fans who want to circumvent fascism.”

Khalifa has more than 22.2 million followers on TikTok. Her content ranges from humorous bits and dancing to discourse on race and her experience as an immigrant.

Khalifa found out through Twitter that her TikTok was supposedly banned. A user tweeted, “It’s an absolute hate crime that they banned @miakhalifa’s TikTok in Pakistan. I hate living here.” Khalifa replied, “LMAOOOO THEY WHAT!!!”

People in the comments said they should start a petition and that “a Pakistani receiving a like from her is peak international recognition.”

“They can ban you from these platforms but not from our hearts,” one user tweeted.

In March, Pakistan banned TikTok for “immoral content” and the “exploitation, objectification and sexualization” of young girls. This was its second ban after the app was banned in October for failing to filter “obscene” content. Pakistan lifted the second ban in April after the app assured that it would filter and moderate its content.

Other people online say Khalifa is not blocked on the platform.

“Your account is not banned in Pakistan and ever since you stood up for Palestine, I as a Pakistani am super proud of you!” one user tweeted.

Khalifa is especially vocal on Twitter about human rights issues including the farmers’ protest in India to protests in Palestine.

“You’re right. I’m privileged to sleep safely in my bed tonight,” Khalida tweeted. “But I vividly remember living through sirens, air strikes, ground shaking, walls rattling in hideout basements, and destruction in Beirut due to unrest. I say #FreePalestine as loudly as I say ‘pray for Lebanon.’”

Khalifa and TikTok did not immediately respond to the Daily Dot’s request for comment.