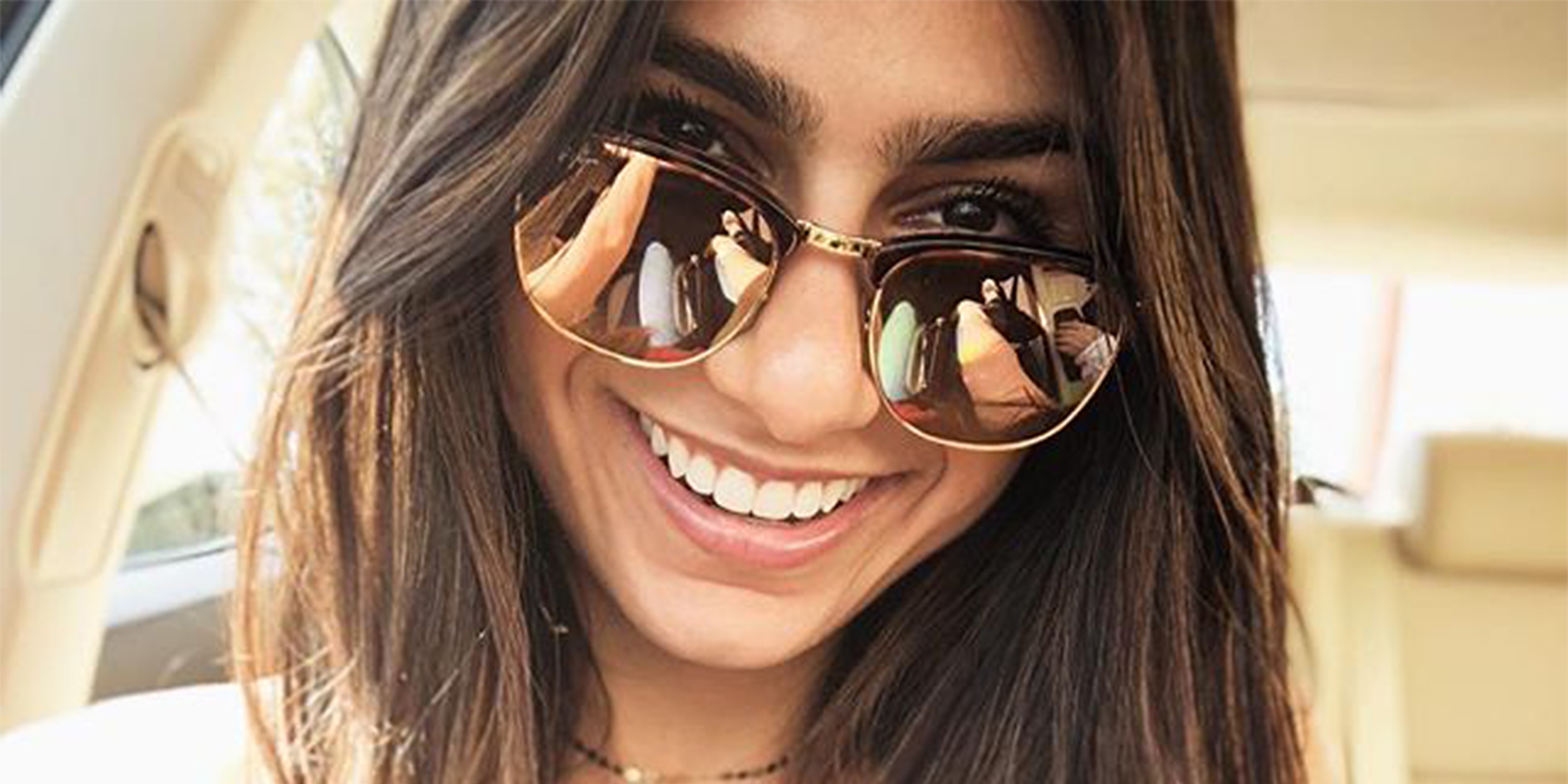 The popular star and sports commentator wants to become the 'Chrissy Teigen' of cooking.

Who is Mia Khalifa?

1) Khalifa was born in Beirut, Lebanon and comes from a Christian family

Despite Khalifa’s notoriety performing in adult films while wearing a hijab, a head covering worn by Muslim women, Khalifa comes from a Catholic family, though she’s no longer practicing, according to a 2015 piece with the BCC. Khalifa, who moved to the U.S. at age 10, told the Washington Post in 2015 that was surprised about the negative backlash relating to those scenes.

“The scenes containing a hijabi are satirical. There are Hollywood movies that depict Muslims in a much worse manner than any scene Bang Bros [the company who made the video] could produce,” Khalifa said at the time.

2) Khalifa has said she didn’t get into the adult film industry for the money, but to boost her self-esteem

Speaking to cyclist Lance Armstrong on his podcast Forward, Khalifa said she didn’t put herself out there as a college student at the University of Texas, El Paso, and was focused on graduating early, all the while losing 50 pounds through exercise.

At age 21, she had her breasts augmented, and immediately afterward, she said her self-esteem was still low. That same year, she was approached to do pornography at a strip mall in Miami. She thought about it for two weeks, but “made the mistake of saying yes and going in,” she told Armstrong.

Khalifa said after her first film, she felt a combination of guilt, shame, and temporary validation.

She told Armstrong the experience was “nerve-wracking,” calling herself  “21 and dumb” when she made the decision and saying she now finds herself feeling uncomfortable when she shows too much cleavage in public.

However, at the time, she didn’t think her videos would be easily found online because she didn’t have social media back then.

All Khalifa had wanted to do was let loose and rebel, but the fame was too much. She said the popularity spiraled out of control once she started receiving death threats from ISIS.

“It didn’t validate me. Nothing like that ever does. That’s not what you should be doing to try to build your self-esteem,” Khalifa said.

While she can’t get the original copies of her videos taken down, Khalifa said she has a legal team that cleans up fake accounts that repost content online.

Speaking to Armstrong, Khalifa said she worked as a bookkeeper for a construction firm and as a paralegal in Miami, but she was too recognizable.

After six months, Khalifa stopped trying to downplay her internet fame and decide to move to Austin, where she’s since rebranded herself and attempted to pursue other careers.

In 2015, a reader for website BroBible who said he went to high school with Khalifa sent the publication Khalifa’s yearbook picture. The photo has since been uploaded to Pinterest.

According to Khalifa’s Twitter feed, her parents enrolled her in military school for her sophomore through senior years of high school after they caught her smoking weed. Several of her classmates have uploaded her yearbook photo from during her time there, too.

Another photo, uploaded to 9gag, shows Khalifa in middle school.

Khalifa herself has uploaded several photos online taken when she was younger.

7) Khalifa is an intense sports fan and commentator who has long stanned for D.C. teams

Chicago Cubs catcher Willson Contreras has also proved himself thirsty AF for Khalifa, though a spokesperson for the Cubs said Contreras’ account was hacked.

Khalifa told Armstrong that she doesn’t feel bad at all for dragging athletes online because “they’re so entitled.” She said she’d never date an athlete, either. She just wants to date someone who does “something normal,” like computer coding.

9) Khalifa was blasted for “coming on to” athletes

Oklahoma quarterback Baker Mayfield shut Khalifa down after she tweeted “daddy” at him in September 2017.

Khalifa’s trolling tweet at the Boston Celtics’ Isaiah Thomas didn’t pan out as planned, either.

Steelers receiver Juju Smith-Schuster also put Khalifa on blast for simply tweeting at him. She said she was just trying to help Smith find his bike after two other friends on the team told her someone had taken it—not flirt with him.

In October 2017, Mia Khalifa announced she would be co-hosting a daily sports talk show called “Out of Bounds”—then quit two months later.

Khalifa said she and co-host basketball star Gilbert Arenas staged her sliding into his DMs as a publicity stunt for the show on Complex TV’s YouTube channel, as if she was caught at her own game for previously dragging athletes who messaged her. Her management responded to Arenas “dragging” Khalifa online with the statement, “Mia Khalifa has acknowledged that her comments were completely out of bounds,” clearly alluding to the name of the show.

After two months as a host, however, Khalifa quit.

On Armstrong’s podcast, Khalifa said hosting her show was her dream job, but she didn’t want to be in Los Angeles and walked away once she realized she wouldn’t watch the show.

“I love Complex. They treated me great and they were really understanding when I said they wanted to leave,” she told Armstrong.

11) Khalifa now hosts her own livestreams on Twitch

Partnering with Twitch TV, Khalifa hosts cooking shows or commentates on NBA cheerleading on the Twitch channel IRL. She also earns money through Patreon subscriptions—she even has a $5000 tier, where only one subscriber can be the Mia Khalifa “MVP.” Khalifa also has a bookie website—but has admitted that her predictions are often wrong.

Khalifa told Armstrong she’s been cooking since she was a child, and has taken after her mother, who cooked their family three meals a day. Khalifa said she wants to become the next Chrissy Teigen when it comes to cooking. She’s currently writing a few sample chapters for a cookbook that will eventually depict the story of her life through recipes.

“That’s all I want—watch hockey on the couch and cook food,” Khalifa said.

Khalifa shut down a fake screenshot that Federal Communications Commission chairman Ajit Pai tried to ask her out to dinner on Twitter.

Speaking to Armstrong, Khalifa said that someone had photoshopped the screenshot and that she would have been much more creative in shutting down Pai’s offer, especially since he led the effort to shut down net neutrality. The “post” was originally shared by satire site Huzlers.com.

“I think about missing my siblings growing up, and if I’ll be invited to their wedding, or if I’ll get a phone call saying, ‘Hey, grandma passed away,’ or if they’ll never tell me,” Khalifa told Armstrong. “Those are the things that keep me up at night.”

According to an April 2017 Medium article from the account “Richest Celebrities” and a March 2018 post from NetWorthPost.com, Khalifa’s net worth is $2.5 million. Meanwhile, a September 2016 post from MajorNetWorth.com states Khalifa’s net worth at the time being $500,000.YouTube channel Modern Whiz, which repeated this $500,000 figure in its January 2017 video about the social media icon, speculated that Khalifa’s net worth stemmed from her adult film work, as well as her social media support of sports teams.

One of Khalifa’s tattoos depicts the cross logo for the Lebanese Forces, a political party that was a right wing Christian militia during Lebanon’s civil war that opposed the Syrian Bashar Assad regime. Another tattoo of Khalifa’s depicts the first line of the Lebanese national anthem. It reads “كلنـا للوطـن للعـلى للعـلم” or “All of us! For our Country, for our Glory and Flag!” according to the Washington Post. At the time, Khalifa tweeted that she had an additional third tattoo referencing Lebanon.

She told the publication she got her tattoos to show solidarity with her father’s political views after the country’s bombings in 2012. Speaking to Newsweek, Khalifa said she wasn’t very interested in Lebanese politics, but didn’t want the country to be bullied by Syria or Israel.

While in the 2015 Post interview she said she “hates” the term “feminist,” she questioned the criticisms and death threats she received from her home country for her work, as well as what they mean for the state of women in Lebanon.

Khalifa told Armstrong that she experienced many of her “firsts” in Lebanon. She was born in Lebanon and lived there for 10 years before moving away. She says she got drunk for the first time when she visited at 15 years old and had her first kiss in the country as well.

However, she said that Lebanon has since denounced her and she’s no longer welcome in the country. Even if she did travel there, she doesn’t think she’d be safe or allowed to return.

“It’s sad that I can’t take my [future] kids to show them where their culture’s from,” Khalifa said.