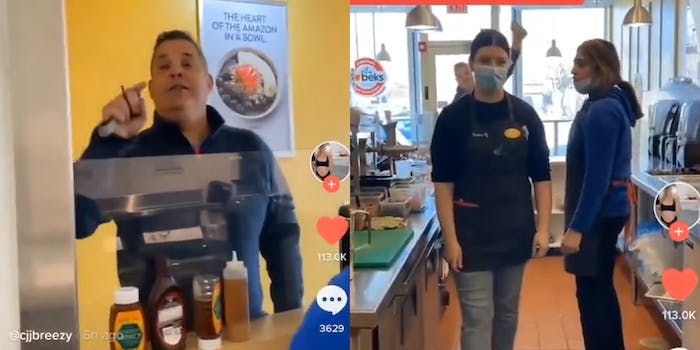 He was upset due to his son's allergic reaction to a smoothie.

A viral TikTok shows a man, James Iannazzo, harassing and throwing a smoothie at workers at a Robeks in Fairfield, Connecticut.

In the video, Iannazzo, a now-former executive at Merrill Lynch, shouts at the employees, demanding to know who made his smoothie. He was identified by police and arrested after the incident.

After he throws his smoothie at the workers, they threaten to call the police and ask him to leave. He then demands to use the phone and attempts to enter the “employees only” door to get behind the counter.

“Fucking immigrant loser,” he calls one of the employees.

Popular TikToker Danesh (@thatdaneshguy) reposted an employee’s original video of the incident after it was taken down from the original account(@cjjbreezy). The reposted video received over 17.3 million views.

According to WTNH, the police said Iannazzo called 911 requesting medical help shortly after arriving home from Robeks because his 17-year-old son had a severe allergic reaction after drinking a smoothie. Iannazzo then returned to the Robeks and demanded to know who made the smoothie that caused his son’s reaction.

“After he started to drink his smoothie, my son lost the capacity to breathe properly; his lips and face swelled up, and he required an EpiPen shot, but it did not offer him relief,” Iannazzo said in a statement according to WTNH. “I called 911. My son then went to the bathroom, threw up and fell unconscious to the floor. He threw up again. My wife gave him another EpiPen while I called 911 again. Thank God, he is doing okay.”

The store’s employees told police that while Iannazzo asked for “no peanut butter” in the smoothie, he did not mention the allergy when ordering.

Iannazzo was charged with second-degree intimidation based on bigotry or bias, second-degree breach of peace, and first-degree criminal trespass. His court date is set for Feb. 7.

Iannazzo’s attorney released a statement regarding the incident on Sunday.

“When faced with a dire situation for his son, Mr. Iannazzo’s parental instinct kicked in and he acted out of anger and fear. He is not a racist individual and deeply regrets his statements and actions during a moment of extreme emotional stress,” attorney Frank J. Riccio II said, according to NBC New York.