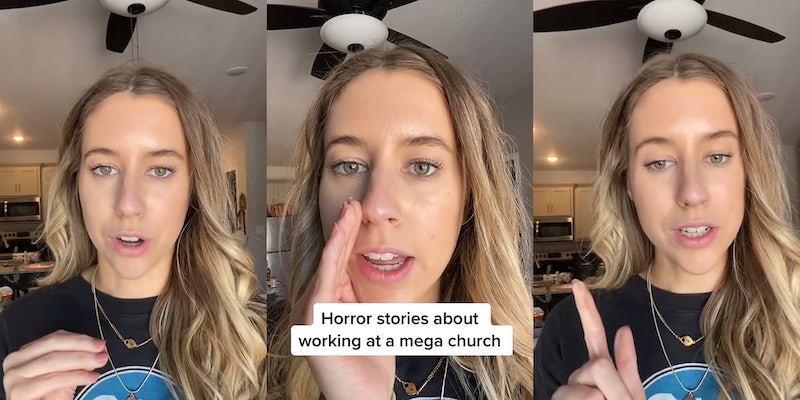 The TikToker claims she was "reprimanded" for seating disabled and lower class volunteers in the front row.

A TikTok account with over 33,00 followers, @mychurchtruth features creator Lexi sharing her personal experiences of working at a megachurch. In one viral clip, she delineates how the church’s leadership viewed and treated some of its most devout volunteers who didn’t fit a particular image.

Her video has received over 1.9 million views on the platform as of Saturday.

Lexi prefaces the viral clip by noting in the text overlay that she plans to share her “horror stories” from her former job at a megachurch, a church with a massive congregation.

The creator starts by explaining that one of the church’s main priorities was ensuring the front row was full of people.

“One of my jobs was to fill the front row…the reasons they wanted the front row full was just for looks,” Lexi explains. “It was just so that it looked full on the broadcast, the simulcast. We were always told to fill it with people who were volunteers, and people who wouldn’t act crazy in the front row or do something weird.”

However, Lexi says this obsession with image led the church leaders to discriminate against lower class and disabled members of the congregation.

“So there were three volunteers that had some mental disabilities, as well as they were from a rougher part of town and didn’t have a lot of money. So their clothes were kinda dirty and messy, but everyone loved them, they were so sweet and really nice,” she continues.

When Lexi would put these volunteers in the front row, she says she got in trouble with the church leaders.

“So I would put them on the front row, and I got reprimanded for doing that,” she concludes the video. “Because the way they looked…and because they didn’t fit the vibe.”

In other videos on her account, she states that her original reasoning for publishing the videos was to create an outlet for herself to discuss all of the less-than-Christian-like things she experienced while working at a megachurch. Lexi did not name the specific church she worked at.

“I won’t be naming the church! Not ready for that, sorry folks,” she wrote in a comment on her first video.

However, there have been a number of megachurch scandals in recent years. Most notable is the Australian-based megachurch Hillsong, which has multiple U.S. locations and has been attached to several celebrities like Kendall Jenner, Chris Pratt, Nick Jonas, and Justin Bieber.

A documentary was released about the religious brand and one of its pastors, Carl Lentz, who became a hot topic of media coverage when he was accused of lying about his relationship status and identity to Ranin Karim, a woman he was having an affair with. When she learned of who he was, she publicly delineated the details of how he approached her, which lead to the dissolution of his relationship with the church.

Hillsong’s founder, Brian Houston, resigned as the Church’s director in January of 2022 following allegations of attempting to cover up sexual abuse claims along with accusations of embezzlement.

Similarly, celebrity Pastor Joel Osteen’s Lakewood Church came under fire at the end of 2021 when a plumber who was working at the property claimed that they found a ton of cash hidden in a wall.

Lexi wrote in the caption of a follow-up video that although she was “glad [the church] gave back to those who really did need it most …it felt kind of icky also.”

She says the church also took folks who “were very involved” with the congregation and would get them a car or furnish their apartment in “a huge surprise” for the volunteer who was being blessed that day. She mentions that the three volunteers were given the spotlight on stage, in addition to having their photographs taken and airing videos of the kindness that the church bestowed upon them.

Lexi mentions that she felt the church only wanted these volunteers from a “rough” part of town to be seen when it benefited their brand.

@mychurchtruth #stitch with @My Church Truth part 2! Maybe this is just me…. Glad they gave back to those who really did need it most but it felt kind of icky also. #churchdrama #churchstories #megachurch #givingback #churchtrauma #megachurches #churchhurt #churchproblems #thoughts #somethingtothinkabout #jesus #givingbacktothecommunity ♬ original sound – My Church Truth

In her most recent video, as of Saturday, Lexi also claims in a text overlay that the lead pastor of the church was “THE spiritual authority” and had the final say on all activities and operations of the congregation.

In the comments section of her initial viral post, Lexi clarified her stance. “Not all churches are bad by the way!” she explained. “Just had a lot of ick situations at one church in particular.”

Other TikTokers shared their own experiences at church congregations of their own, with many expressing their disbelief at many of the practices some of the churches engage in.

“Single mom here I went to a mega church for years every Sunday, volunteer, ect. I only heard from people right at Christmas for the Angel tree,” one user wrote.

“Elevation in Charlotte area is toxic,” another claimed. “Was a volunteer for several years, saw a decent amount of terrible things.”

“I was a camera operator for a mega church in Atlanta for years,” a third recalled. “It’s all a show! I had to leave the church to fully understand ‘god’s’ love.”

Several users pointed out the hypocrisy of Lexi’s former church and its values.

“Aren’t churches suppose to help the poor? Seems like good optics to me but what do I know I’m just an atheist,” one user offered.

“Read James 2: 2-4 God clearly speaks against this stuff!! My heart goes out to those people,” a second added.

Many also took the opportunity to joke about the irony of the church’s alleged treatment of its congregation.

“Mega church… where the pastor drives a more expensive car then any of his parishioners,” one user riffed.

“I still can’t get over how people pay 10% of their income to be part of this book club situation,” another questioned.

“Wait till they hear about that Jesus dude and how he and his homies dressed,” a third wrote.

In her latest video, Lexi also added that she was “never asked to do anything illegal” for the Church, but felt that a lot of the instructions she was given were “strange” and that the ruling “vibe” of the “lead pastors” rubbed her the wrong way.

The Daily Dot reached out to Lexi for further comment on TikTok, as other methods of contact were unavailable.