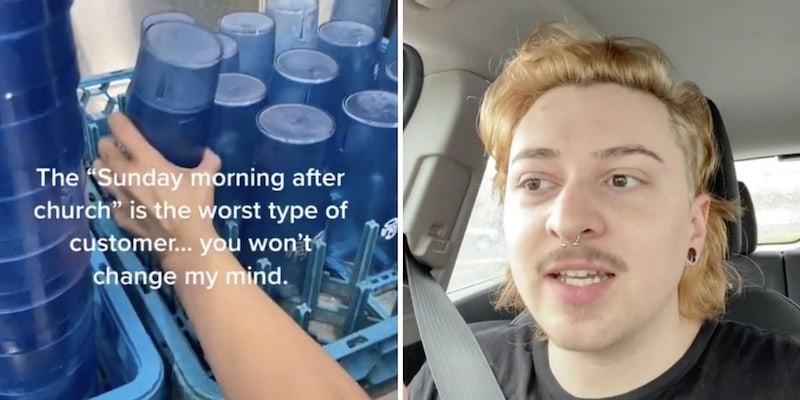 'They're the worst human beings on Earth.'

Food-service workers are agreeing on TikTok that customers who show up to their workplaces right after church are the “worst type of customer.”

One TikToker, @saint_hypnos, even called them the “worst human beings on Earth.”

@saint_hypnos stitched another TikToker who kicked off the conversation. On April 3, that TikToker, @jenmich416, made a simple TikTok, showing themselves grabbing a drinking cup from a stack. “The ‘Sunday morning after church’ is the worst type of customer… You won’t change my mind,” the text overlay on their video reads. They hashtagged the five-second clip “#serverlife.” The video was viewed over 700,000 times.

@saint_hypnos stitch also went viral, with nearly 200,000 views in under a week.

Viewers in the comments section of both clips also co-signed the claim, sharing their own stories of working such shifts.

“We call em CAT. Christians against tipping,” one user said under @jenmich416’s video.

“A group of 20 brunch ladies showed up, verbally abused me/made me cry and then left one of those bible pamphlets that look like money as a tip,” another person wrote under @saint_hypnos’ video.

“They push their way through the crowded waiting area then get astonished by the fact there’s a 45+ minute wait,” another said in a comment that @saint_hypnos responded to in a video with a story about a disgruntled “church lady” who who didn’t want to wait 45 minutes for a table on a Sunday.

The Daily Dot reached out to @saint_hypnos via TikTok comment.