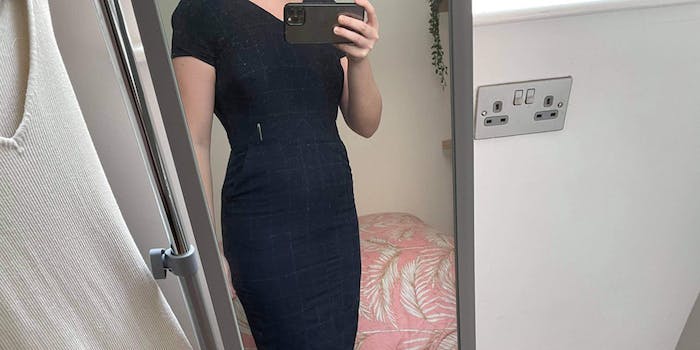 In a quote Tweet posted on Wednesday, @TheGradMedic, a medical student at Newcastle University in the U.K., said that a dress she wore to a graduate exam was deemed “the most inappropriate dress” that the university “had ever seen.”

A Tweet from @MedicGrandpa, who identifies themselves as a friend of @TheGradMedic, explains that the student was “yellow-carded” by an examiner because of the dress during her Objective Structured Clinical Examination (OSCE), an exam that evaluates medical students in a “clinical setting” with people role-playing as patients.

According to a Tweet from @TheGradMedic, the exact complaint she received from her OSCE examiner was “‘student had short dress with no leg coverings—roleplayer commented immediately station said looked unprofessional and I agree.’”

“Could someone explain to me how it’s 2021 & medical schools are still pushing sexist notions of primness upon its female student cohort, for daring to display their ankles,” tweeted @MedicGrandpa.

In a Twitter direct message, Ciarán (@MedicGrandpa) told the Daily Dot that he posted about @TheGradMedic’s experience initially because “the medschool had told [@TheGradMedic] that to voice these issues on social media would be a potential contravention of GMC guidance.” Ciarán is also a medical student at Newcastle University.

GMC stands for the Grand Medical Council and is a group that monitors doctors and medical students. Ciarán told the Daily Dot that the GMC has social media guidelines that stress that anything said on a social platform can jeopardize a student’s perceived professionalism.

After complaining to Newcastle, @TheGradMedic said the university determined that the “the [examiner’s] word is final and the investigation is closed.”

“I had to lodge a separate concern to deal with the examiner, the concern was refuted, I was refused the right to not have the examiner again, and the university closed the investigation,” she tweeted.

In an apology on Twitter, Newcastle University tweeted that the comment about the length of @TheGradMedic’s dress was from a “role-play patient” as part of the OSCE exam.

“We want to apologise once again to @thegradmedic for any offence or distress caused by this incident,” Newcastle University tweeted. The official account also said the yellow card was rescinded.

@TheGradMedic responded, calling the apology “infactual information” and said the complaint about her dress came from both the role-play patient and the examiner evaluating her.

She’s been intentional about her public response to the incident and tweeted that she’s only been so forthright on Twitter because Newcastle published “incorrect details” about her experience. @TheGradMedic also tweeted that she contacted the British Medical Association, a U.K. doctors union.

That said, she has been careful to not reveal any details about the examiner “to protect those investigating” the incident. In order to protect herself and her medical career, she’s also tweeted that she won’t be commenting on the situation to the press. The Daily Dot has reached out to @TheGradMedic via Twitter direct message.

In a Tweet, @TheGradMedic said she hopes her experience “leads to wider questions being asked [regarding] discrimination, policies, but also the freedom (or lack of) for students/doctors to discuss issues without fear of repercussions.”

Prior to tweeting about her experience, @TheGradMedic retweeted accounts from other female medical students who say they were told that their outfits and/or jewelry were unprofessional, during OSCE exams or otherwise.

Newcastle University did not immediately respond to the Daily Dot’s request for comment via Twitter direct message.