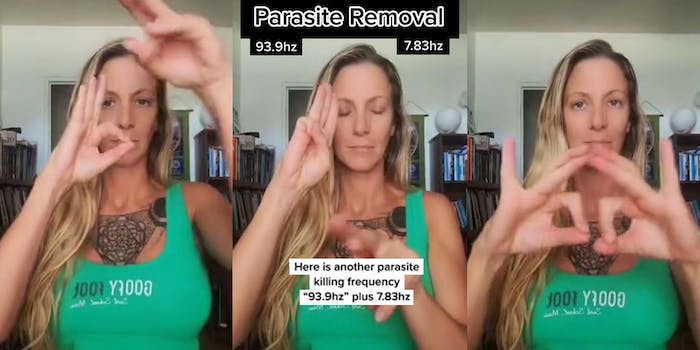 A growing number of TikTokers are combining clairvoyance with medicine, with ‘medical intuitives’ going viral on the app by claiming that certain sound frequencies can cure people of internal parasites like worms.

TikTokers like @mrsrogershood, who has dedicated their account to various ‘cleanses’ and spiritual exercises to get rid of parasites, are posting videos of various sound frequencies which, according to them, can disturb and kill parasites inhabiting the body.

One video has thousands of views, with other ‘medical intuitives’ on the app dueting it, making certain hand movements and providing other advice about how to “amplify” the effects of the video and succeed in killing the parasites.

TikTok videos under related hashtags such as ‘medicalmedium’, ‘medicalintuitive’, and ‘spiritualhealing’ have a combined viewership of nearly 250 million, with countless TikTokers marketing themselves and their content around the ‘medical intuitive’ label. One such TikToker is @spiritfluent who, in one video, defines their “medical intuition” as follows:

“I’m able to jump into people’s bodies, minds, and soul and look at what’s physically and mentally going on with them. I can see any experiences or emotions from throughout their lives as well as if they’ve inherited anything from their family.”

She added that she can help “heal” people from “anything that’s holding them back in life.”

While many of the commenters on these kinds of TikToks are supportive, some TikTok users call out these ‘medical intuitives’ in their content. For example, Dustin Dean, who has over 400,000 followers, posted a video calling out @spiritfluent.

“This is so unbelievably wrong, I can’t fathom how this person has a following,” he said in a TikTok. “She has no medical experience or background. In some cases, she’s claiming to know more than what a doctor knows.”

He continued, “Imagine she tells someone they’re totally fine, and they actually have some underlying condition, and they die! This person’s account shouldn’t even be on TikTok, it should be banned for disinformation and dangerous activity.”

Although medical intuitives — or medical mediums — have become popular on TikTok, they have long existed outside of the app. The most high-profile medical medium practitioner is Anthony Williams, a self-proclaimed medium who offers medical advice due to their purported ability to communicate with the ‘Spirit of Compassion’. Williams has written several books and frequently appears on TV and websites such as the Gwyneth Paltrow-owned Goop.

However, many experts have been vocal about their concerns surrounding medical intuitives. In an interview with Refinery29, Timothy Caulfield, a law and health expert at the University of Alberta, said, “The idea of a ‘medical medium’ is 100 percent science-free nonsense. It is based on the supernatural idea that people can ‘read’ what is the best health strategy is for a person. It is particularly offensive when this pseudoscience is coupled with the [apparent] marketing of products, like supplements, that lack good clinical evidence.”

Dustin Dean, @mrsrogershood, and @spiritfluent did not immediately respond to The Daily Dot’s request for comment via Instagram direct message.