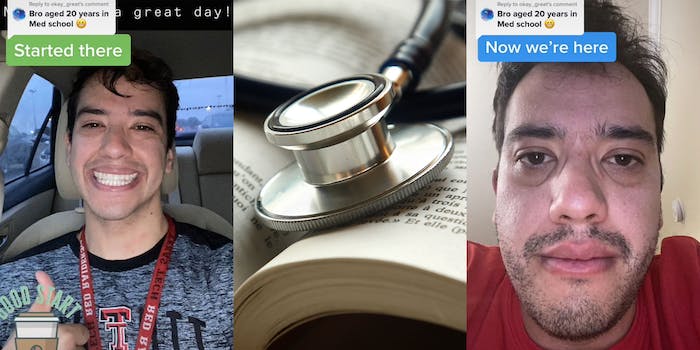 ‘No job will ever make me lose my youth like this’: Student shows how he’s changed while in med school, sparking debate

'I think that really shows what stress can do on the body itself.'

A student used TikTok to show the apparent physical toll medical school has taken on him, which sparked a debate among viewers.

The student, Javi Ochoa (@javifromtiktok), showed a series of photos and selfies from when he first started med school looking excited. Then he contrasted those by showing current selfies of himself appearing tired with bags under his eyes. “How much has med school aged me: part 2,” the text overlay reads.

“But the glory days shall return soon,” Ochoa continued via the on-screen text, referring to how he looked at the start. He was responding to a comment that claimed he “aged 20 years in med school.” Ochoa has over 40,000 followers on the platform.

As of Thursday, the video received about 3.5 million views and more than 2,500 comments.

Multiple viewers took Ochoa’s video as a sign that they should back out of medical school and choose a different profession to pursue.

“Note taken don’t go to med school,” one viewer commented on the video.

“Maybe this my sign not to apply medicine and do dentistry instead,” another said.

A third commented, “convinced im not interested in medicine anymore.”

One viewer commented that Ochoa aged from 23 to 53, and others said they’d never let a job stress them.

“No job will ever make me (lose) my youth like this sorry,” one TikTok user said. In reply to the comment Ochoa wrote, “Lol this is cute.”

The TikToker apparently wasn’t the only user who came out of med school looking older. Other med students commented that they had similar experiences.

“I lost half of my hair during intern yr smh,” one user said.

“Same.. going to get Botox after I graduate..” another wrote.

Others said Ochoa’s dramatic transformation displays how much stress can affect the body. One viewer said it’s ironic that he’s in the health industry.

“The irony of the health industry never fails to amaze me,” the viewer wrote.

Another viewer commented, “I think that really shows what stress can do on the body itself. stress can kill people faster than eating fried chicken everyday.”

Ochoa claimed in a comment that the comments the video received “earned [him] some hella TIK tok” money. “So turning them on so bring it haha but don’t be shocked I clap back hahaha,” he wrote.

The Daily Dot reached out to user @javifromtiktok via TikTok comment.