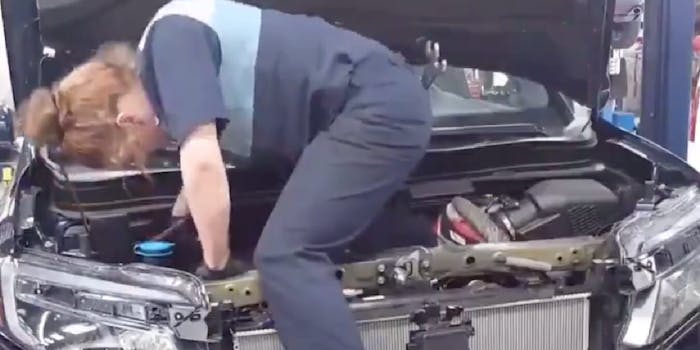 The 24-year-old also says her co-workers sexually harassed her.

Management at Don Ayres Honda dealership in Fort Wayne, Indiana, reportedly fired Kirsten Vaughn after her co-workers learned of the OnlyFans account where she posted adult content, according to BuzzFeed News.

Vaughn told BuzzFeed that after she shared about her OnlyFans account on her Instagram, her co-workers started watching the videos in groups at the workplace and sexually harassed her.

Vaughn was fired in February, but it was her tweet from last week that went viral.

In a video where she showed her work as a mechanic, she wrote, “Really a shame they had to fire me for having my only fans page, cuz I got down at my dealership.”

“Here’s me doing a complete a/c system replacement due to ‘black death,’” she added. The accompanying video has been viewed more than 250,000 times.

From BuzzFeed’s report, it appears that the workers who allegedly sexually harassed Vaughn were not fired. It’s not clear if they’re being investigated. John Watkins, the general manager at the dealership, did not respond to the Daily Dot’s request for comments by publishing time.

In communication with BuzzFeed, the management said Vaughn was fired for violating company policy but did not detail the violation.

In audio recordings reviewed by BuzzFeed, Jason Johnston, a human resources official at the dealership, along with Watkins, appeared to blame Vaughn for the circumstances.

“If there were co-workers over there who had access to your page, that might encourage them to approach you with unwanted sexual conduct or comments,” Johnston reportedly said on a recording.

“They deemed me a ‘distraction’ and because I post ONLY ON MY ONLY FANS PAGE, naughty pics in my uniform, they were mad,” Vaughn said in a follow-up tweet. “I even blurred out my uni colors n everything but they didn’t care.”