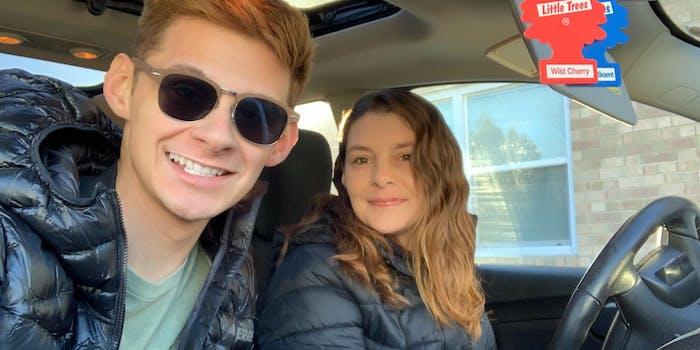 'Kind of an awkward conversation to have over text don't you think?'

A mom on Twitter is going viral for her epic response to a co-worker’s attempt to expose her son’s OnlyFans account.

The exchange was shared by her son, Christopher, to his Twitter page.

“My moms coworker just exposed me for having an onlyfans because she saw my photos on her sons phone and my mom confronted me,” he captioned the tweet. Attached were two screenshots of a text conversation.

OnlyFans has been on the rise of late. The social media service allows people to post lewd content for paid subscribers to enjoy.

At the outset of the conversation, Christopher’s mother seems thoroughly upset. “Christopher Michael,” she begins. The use of what I assume is his first and middle name will send shivers down any child’s spine. “Why did Ms. Jamie tell me she saw your nudes on her sons twitter? Are you seriously posting your nudes for money,” she asked.

A clearly spooked Christopher responded. “I uhhhhhhh may or may not have an onlyfans? So I may or may not post pictures to promote it,” he wrote back, before attempting a deflection. “All hypothetical talk here btw.”

“Hypothetical? Are you kidding me,” his seemingly upset mother responded. “She showed me the tweets, as your mother this is very worrying for me.” When he didn’t promptly respond, she laid on the mom-guilt. “Are you not going to respond to me,” she asked, before following it up with a crying Memoji. Luckily Christopher didn’t wait too long to reply.

“You can go ahead and call me if you’d like and try to explain it but I honestly don’t care, I was just pretending to care because Ms. Jamie was in my office still. Chase the bag boo,” Christopher’s mom wrote back. “Also I will be updating my Mother’s Day list and Birthday list and Christmas list for now on.”

Christopher was speechless after that. The text conversation ends with nothing but an ellipse from the son of this year’s top contender for the “Mom Goals” award.

In the comment section for his now-viral tweet—which currently stands with 161,000 likes and 17,500 retweets—Christopher shared a photo of he and his mom. “For everyone saying that this isn’t my mom here’s the photo to shut you up because it is haha,” he wrote. “She’s 38 and looks good for her age so kindle (sic) back off.”

Spoiler alert: his mom is a total babe.

People quickly pointed this fact out in the comments. “What’s her # tho,” one commenter asked. Others requested that she make an OnlyFans account herself.

While everyone else was drooling over Christopher’s mother, the rest of the comment section was making jokes about the text conversation. “She said oh you making MONEY money I’m bouta start asking for more expensive shit,” one person wrote.

While some commenters refused to believe that the story was true, others were thoroughly touched by Christopher’s supportive mom. “Hug your momma for all us industry works (sic) who families conversations went the other way,” one commenter wrote. “Bless be to both of you.”

Oh and don’t worry, Christopher was kind enough to share a link to his OnlyFans. That is how all of this started, after all.

We reached out to Christopher.