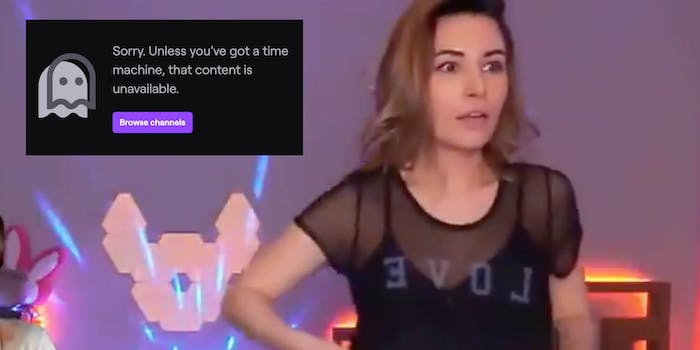 The popular streamer appeared to inadvertently flash her viewers on Friday.

Popular Twitch streamer Alinity Divine has been suspended from the platform after she appeared to inadvertently flash the camera on Friday.

The incident took place during a stream in which Alinity was attempting to place a pillow under her clothes but ended up lifting her shirt too high in the process.

The streamer is said to have pulled the video from her channel soon after, but not before users were able to save copies of the clip and spread it online.

Twitch users almost immediately began calling for Alinity to be suspended, pointing to the site’s rules that strictly prohibit nudity. Although it appears Alinity’s actions were an accident, users claimed that other streamers have been suspended for far less.

Many also accused Twitch of giving Alinity preferential treatment given her prominent status on the site. Not only that, the streamer has survived other controversies including allegations of abusing her cat, among other things.

Feeling the pushback, Alinity went on to announce on Twitter Saturday that she would be taking a three-day break from Twitch.

“Hey so regardless of whatever Twitch decides to do, I’m gonna give myself a 3 day suspension from the platform,” she tweeted. “I think it is fair. Have yourselves a nice day!”

But it appears Twitch ultimately decided to suspend her account anyway. Those who visit the streamer’s page are now met with the following message: “Sorry. Unless you’ve got a time machine, that content is unavailable.”

It currently remains unknown how long the suspension will last. Twitch thus far has declined to comment on the matter.