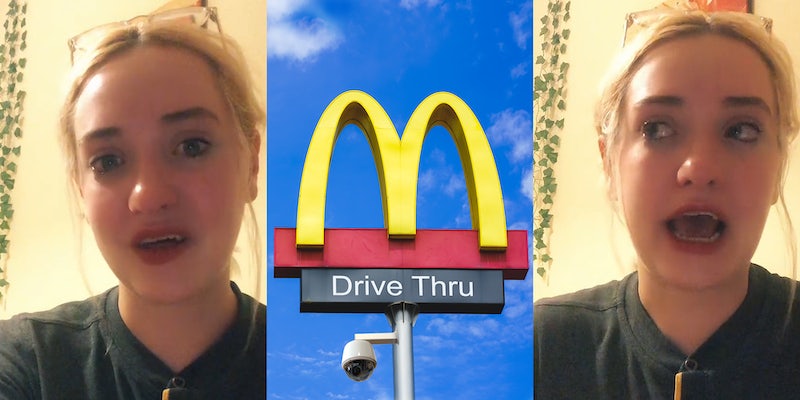 ‘It made me feel so humiliated and embarrassed’: McDonald’s worker says her managers spied on her through camera to make sure she was working

‘They’re all watching me like I’m some kind of reality TV show.’

In a viral TikTok series, a McDonald’s employee said she caught her co-workers and managers spying on her through a security camera. The video series sparked debate in its comments section over workplace surveillance and bullying.

The viral video, which has over 4.7 million views and was posted Monday by TikToker Tizzie (@tizzie..mia), shows the worker in tears, wearing a McDonald’s uniform and describing a recent incident she says took place on the job.

The TikToker says she has been working at the fast-food restaurant for a few months and is the only employee at her location that takes orders from customers, while other employees “do what they want.” She claims her managers have done nothing to provide her with additional assistance for taking orders.

“I have something to say about McDonald’s: First off, don’t work there. Just don’t work there. … My managers may see this, and I hope you do, because what you’ve done to your own employee is wrong, it’s obnoxious, it’s rude, and it’s horrible,” the TikToker says in the video.

She then says she told her manager a few hours in advance that a family member, her grandmother, would be visiting her at her new job. However, she claims that when her grandmother arrived, her boss wrongly accused her of neglecting another customer’s order after monitoring her through a camera alongside her co-workers.

“There were no orders on the screen. … I go and take her order, and I treat her like any other customer. … You can see that on the security camera. But before I take her order, an employee walks in and waves at the camera. … And she goes, ‘Oh, you know the manager is watching you.’ … Why does he think that he needs to watch me? What does he think that I’m going to do?” the TikToker says in the video.

Shortly after, the TikToker says her boss criticized her for not taking an order quickly enough after it appeared on screen. After he finished criticizing her, she says she went to the back of the restaurant and found out all of her co-workers except one had been watching the situation unfold.

“I walk to the security room, every single employee besides one and all the managers are watching me on the security camera. Every single one of them. Imagine that: All your work people are just watching you behind your back. I was the one who got told off for not working, but yet they’re all watching me like I’m some kind of reality TV show?” the TikToker says in the video.

“I am aware I can get in trouble for posting this, but what they did was wrong, and the way they have been treating me is horrible!” the TikToker captioned the video.

@tizzie..mia I am aware I can get in trouble for posting this, but what they did was wrong and the way they have been treating me is horrible! #mcdonalds #4u ♬ original sound – Tizzie 🦋

Viewers in the comments section debated the alleged workplace surveillance, taking shots at the managers and co-workers in the story.

“No job is worth this. Absolutely none,” one user argued.

“McDonalds managers are literally on a power trip,” another criticized.

Users also related to the experience of being scapegoated in the workplace, saying, “I have absolutely been there. everytime I had finished all my orders I got asked to stock up while everyone else in the click got to stand and do nothing.”

“My daughter works at maccies and often comes home upset because of the managers,” another user shared.

Users urged the TikToker to take action and “raise a formal grievance” to McDonald’s corporate, and many tagged the company and asked it to help the TikToker out.

“This is BULLYING!! @mcdonaldsuk sort this out!” one user demanded.

In a comment under her first viral video in the series, the TikToker also updated viewers that she would be resigning from her position at McDonald’s.

“Thank you guys for all the support! I appreciate it so much, I will be handing in my notice as it made me feel so humiliated and embarrassed,” the TikToker commented.

In a follow-up video, which has over 330,000 views, the TikToker says that although she knows she could potentially get fired for posting her TikToks, no amount of money is “worth the humiliation” she endured at work. She says after she walked in to discover her co-workers watching her, she went into another room, tried not to cry, and spoke with the one other employee who wasn’t watching the camera.

She says she also spoke out to the manager who allegedly criticized her for not working hard enough, arguing she is “the only one who is doing these orders” while everyone was in the back not working.

In a third follow-up video, which has over 260,000 views, the TikToker continues to speak out against the managers who she alleges treated her poorly and criticized McDonald’s as a company.

“No matter how hard I work, no matter how good I am, how bad I am, how fast I work, it doesn’t change the price. I still get paid the same. But it’s not even about money at this point. It’s about human decency,” the TikToker says in the video. “I have seen a lot of videos—on TikTok, on Instagram, on YouTube—of people who have worked at McDonald’s and they do get treated like shit.”

As previously covered by the Daily Dot, many workers at McDonald’s have discussed on TikTok their issues with bad management, low pay, and the pressures of dealing with disrespectful customers. In addition, workers from other companies on the platform have recently called out their employers for workplace surveillance and discuss the mental toll camera monitoring takes on employees.

The Daily Dot reached out to TikToker Tizzie via TikTok comment and the McDonald’s press team via email.