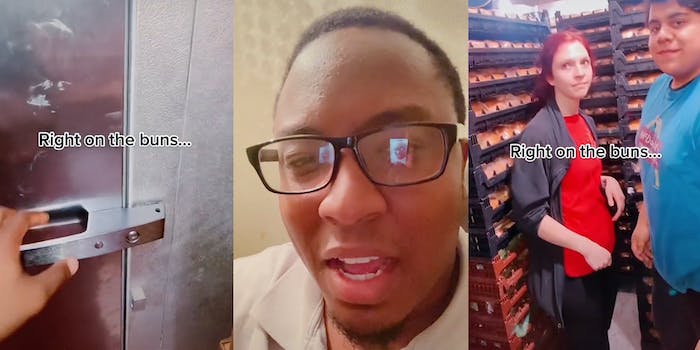 ‘Out of everyone, I’m the one that got fired?’: TikToker says he was fired after catching 2 co-workers allegedly kissing in freezer at McDonald’s

'So this is what goes on behind the scenes. Right on the buns…'

A TikToker says he was fired from McDonald’s after sharing a video he took at work. He claims he was racially discriminated against and has plans to sue.

Rickey (@rickeyg2) posted a video in May of him allegedly catching two of his McDonald’s co-workers making out in the walk-in freezer. The seven-second clip simply shows him opening the door and two employees backing away from one another.

“So this is what goes on behind the scenes,” he wrote. “Right on the buns…”

It wasn’t immediately clear if the video was really the TikToker catching the two off guard or if it was staged for a laugh.

Roughly two weeks later, Rickey posted another video announcing that he got fired.

“My boss found that video, and, out of everybody, I’m the one that got fired,” he says. “Bro, that might be some racist shit.”

Viewers agreed with him that it didn’t make much sense for him to get fired at all, let alone be the only person who faced consequences for the video or its content, and suggested Rickey get a lawyer.

In a later update, Rickey claims he contacted the U.S. Equal Employment Opportunity Commission and plans to pursue a lawsuit.

“I’m not just suing about this one thing. That was simply the icing on the cake. There’s been numerous occasions where I’ve received racist comments and racial slurs while working there,” he alleges. “An extreme amount of abuse, basically.”

He also alleges there were discrepancies in his paycheck that other employees didn’t deal with and that he was the only Black employee at the location.

“It’s really not fair. They fired me on some racist stuff. And honestly, I was about to apply for the management position, too,” he says.

Rickey has 22,000 followers and started a GoFundMe for his attorney fees, he said on the campaign.

The Daily Dot has reached out to @rickeyg2 via TikTok comment and to McDonald’s via email.