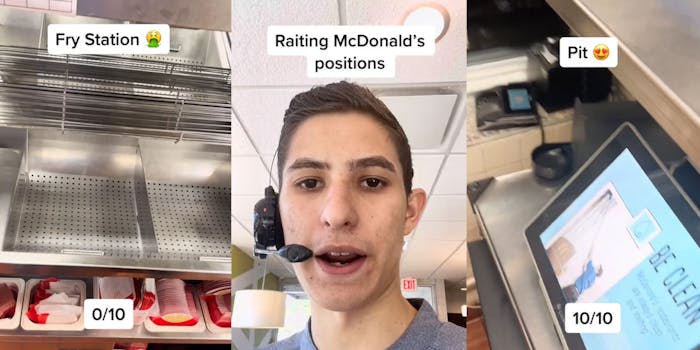 ‘Bro pit is a punishment’: McDonald’s worker rates every position at work

'Taking orders and making drinks is the best.'

A McDonald’s worker went viral on TikTok after he rated every workstation at his McDonald’s on a scale from 1-10.

User @mcdonalds_hacks101 focuses the camera on himself and starts the video by saying, “Hey guys. Today, we’re going to be rating McDonald’s positions. Let’s go.” He then begins rating each station, from lowest rating to highest.

He shifts the camera to the fry station, which seems to be his least favorite position as he admits he hates working it. He rates it a 0 out of 10. Next, he shows the viewers the register in the front, where he gave it a 6 out of 10. He continues rating the positions, giving presenting and running food a 7 out of 10, cooking an 8 out of 10, and the “pit” (working drive-thru) a perfect score, 10 out of 10, as that’s the station he feels the most comfortable with.

The video has been viewed over 171,000 times since it was posted on July 24. Commenters had mixed reactions, with some McDonald’s workers agreeing with the TikToker’s rankings.

“I love running ESPECIALLY WHEN ITS PACKED,” one person commented.

“lmao fry station was the worst. I spent many years managing and supervising in Michigan. I think u are awesome,” a second said.

“Taking orders and making drinks is the best,” a third wrote.

“I love grill!! All the homies were with me and we’d just have fun,” a user stated.

Others disagreed with the TikToker.

“bro pit is a punishment,” one user commented.

“fries is my favorite because you don’t have to deal with any customers,” a second shared.

“fry station is the best. the worst is running for front counter tied with headset,” a third stated.

“I absolutely HATTED back cash I use to want them to send me home if I was going back there,” a fourth wrote.