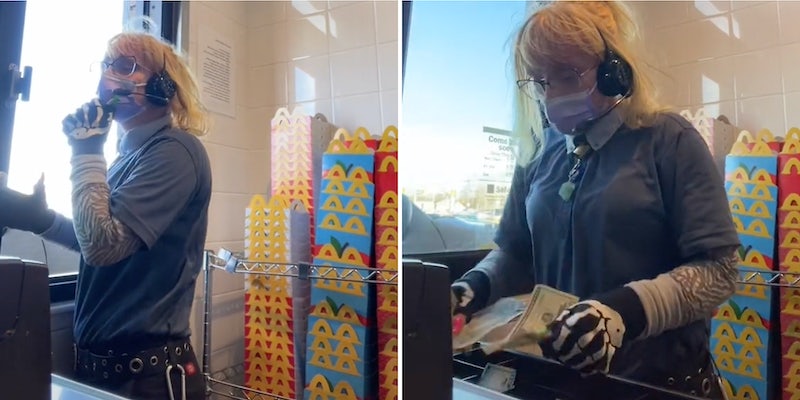 ‘I genuinely don’t understand why we can’t record ourselves’: McDonald’s worker says they were fired for making TikToks

'But they have cameras all over the building that record us constantly.'

A TikToker and McDonald’s worker has gone viral and sparked considerable discussion after sharing that recording TikToks on the job got them fired.

The video disclosing this sits at over 175,000 views and features the TikToker skillfully doing their job—which makes their firing all the more surprising.

TikToker @motheraangel, who posted the video, has previously uploaded several videos that appear to be filmed at their McDonald’s location. In those videos, the TikToker is either telling stories or giving their opinion on topical issues while at their place of work, though it is unclear whether Asthon (@motheraangel) was on the clock during the recording of these videos.

It was these videos in aggregate that caused them to be fired, the TikToker claims.

Comments were overwhelmingly supportive of Ashton.

Some commenters noted the hypocrisy of McDonald’s not allowing workers to record video while the establishment itself records their workers throughout their entire shifts. One commenter writes, “I genuinely don’t understand why we can’t record ourselves working but they have cameras all over the building that record us constantly.”

Others point out how Ashton seemed to be a consistently good worker, noting how they were able to simultaneously handle incoming orders and process current orders.

“You charging them and taking an order at the same time gave me anxiety i could never,” one TikToker noted.

“Your multi-tasking skills are impressive,” noted another.

Further commenters expressed that the McDonald’s location didn’t realize what they were losing when they fired Ashton.

“You are literally so fast, kind and helpful, you handle the pressure so well,” writes one commenter. “Unfortunate they couldn’t see that.”

“You should become a server with those multitasking skills,” added a further TikToker, going on to say that they would make more as a server than they would at McDonald’s.

However, while some workplaces are cracking down on TikTok use, Fast Company also detailed instances where workplace TikTokers were not fired for using the platform on the job—presumably because it results in free promotion of the location for which they work.

This free promotion was apparently not enough for McDonald’s, who appear to have fired Ashton. Nonetheless, TikTokers are largely supportive of them and are wishing the TikToker all the success in the future.

“They will regret it,” says one TikToker, later adding, “you’re a great employee.”