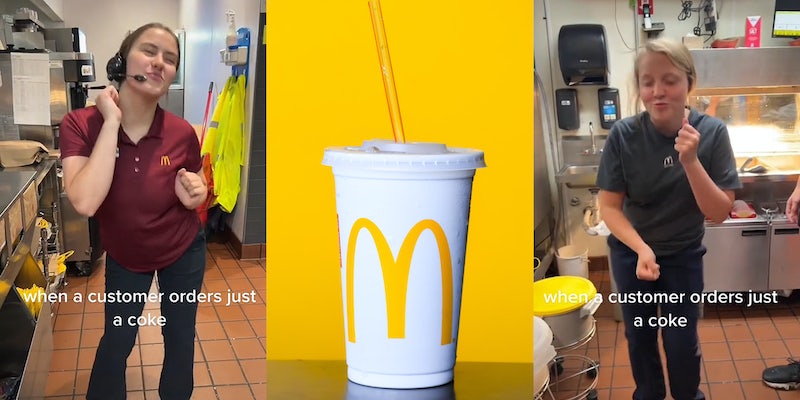 McDonald’s worker says she loves it when customers only order a Coke, sparking debate

A McDonald’s worker went viral on TikTok after she revealed she loves it when customers only order a Coke.

The video shows the user Eliana (@elianarice32) wearing a McDonald’s uniform and a headset as she dances. Eliana dances next to the fry station as the overlay reads, “when a customer just orders a coke.” The video then shifts over to her co-worker, who is also dancing.

The clip has been viewed over 710,000 times since it was posted on July 8, resonating with users of the popular video-sharing platform.

“me with a sweet tea,” one person commented.

“my favorite ppl when i worked there or the customers who knew exactly what they wanted no hesitation!” a second stated.

“Or when we don’t have the item they want so they say nvm thank u and leave,” a third said.

“i love it when it’s not busy and they only want a drink,” a fourth wrote.

There were users who were surprised that the workers actually like it when a customer just orders a drink.

“I used to get scared going to good places and ordering just drinks,” one user said.

“Okay so do the employees at my McDonald’s love me cause all I do is order a Diet Coke,” a second user wrote.

“I’m always so afraid they’ll be mad I’m getting one thing,” a third shared.

“So you don’t think I’m annoying for only getting a drink?” a fourth asked.

“i literally go to mc and get a medium diet coke every morning,” another added.