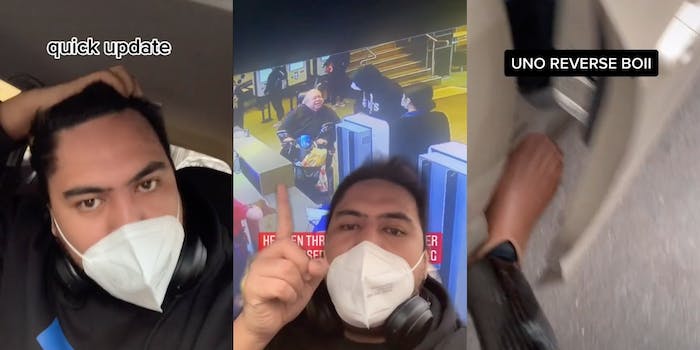 The TikToker was defending McDonald's staff from the man, who called them slurs.

A “racist boomer on a scooter” created a commotion at an Australia McDonald’s when he began harassing the staff members and making racist remarks.

The entire interaction was witnessed by @pnuks on TikTok, who shared his reaction to the incident on the platform. According to Pnuks, the anti-vaxxer, anti-masker boomer made fun of the McDonald’s staff for being understaffed and having dirty floors.

Pnuks tried to ignore the situation, thinking it wasn’t his business. But then the boomer told a staffer to “go back to where they came from” and called the workers “w*gs,” an Australian slur for Black and darker-skinned people.

Pnuks said he was “livid.”

Since the McDonald’s staffers couldn’t swear at the customer or talk back, Pnuks apparently did it for them.

“You can be annoyed because you’re old but you can’t be racist,” he said.

In another TikTok that went viral, Pnuks said he filed a police report against the boomer, who tried to run him over with his scooter after being called out. He played a clip of the man trying to ram into him with the motorized chair. Pnuks then said it’s not OK to use one’s disability to threaten people.

Then he pointed out his own disability: prosthetic legs. The boomer tried running over his feet, but Pnuks didn’t move because he couldn’t feel the hit. Suffice to say, the boomer’s attack didn’t go as planned.

“It’s not real, boy,” he laughed. To demonstrate how unreal they were, he slammed his car door on his own leg.

“I gasped when you closed the door on your foot,” one viewer commented.

Others applauded Pnuks for holding his ground, prosthetic legs or not.

Pnuks did not respond to the Daily Dot’s request for comment.