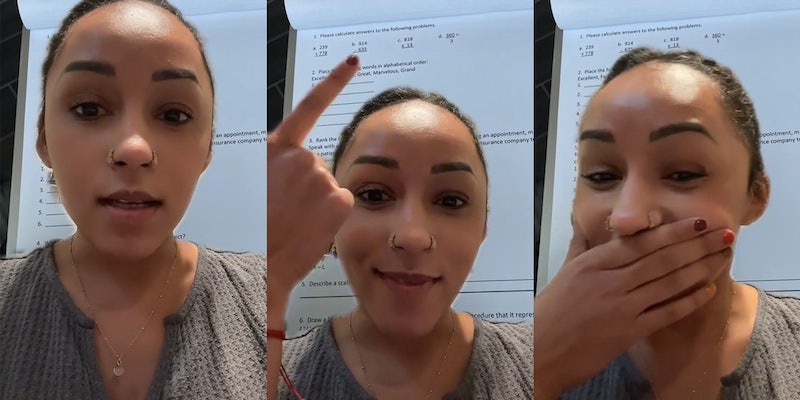 ‘Tell me why they had me doing f*cking math’: Candidate has to solve math problems on job application

'Whatever it is, they don’t pay enough.'

The hiring process is more intense than ever before. While applicants used to expect one or two rounds of interviews and light questions about their resume for entry-level jobs, applicants now must deal with a process that involves dozens of applications before a single interview. When they actually get the interview, they may expect interrogation about their social media habits, requests to do company research, and several rounds of interviews, even for jobs that pay around minimum wage.

A job hunter on TIkTok claimed she was asked to complete math problems during an interview for a receptionist position.

“I went to this job interview yesterday and they handed me an in-person application to fill out,” user Maysun (@maysunmilk) recalls. “Tell me why they had me doing fucking math.”

At first, many users shared that tests like these are relatively common for receptionist positions.

“I had to take an online timed math test for a receptionist position,” one user noted. “it was intense.”

“I applied for a receptionist job too and they sent me a whole test like that !!!” another added.

However, other users soon chimed in to say they were given similar tests for positions where math was not seemingly applicable.

“They did this when I interviewed for a security job lol,” a commenter claimed.

“They did that to me for….a cleaning job….” a second stated.

“I was filling out an application for ace hardware and they had a 2 min timed test with a bunch of math questions/random word problems… ace hardware…” a third remembered.

Others said that if they were confronted with the same prompt, they would simply call it quits. Many derided the modern application process in general, saying that a place that offers an application like this is often not worth the effort of getting the job.

“Oof, I prbly would’ve walked out,” a user wrote.

“Whatever it is, they don’t pay enough,” another said.

The Daily Dot reached out to Maysun via Instagram direct message.