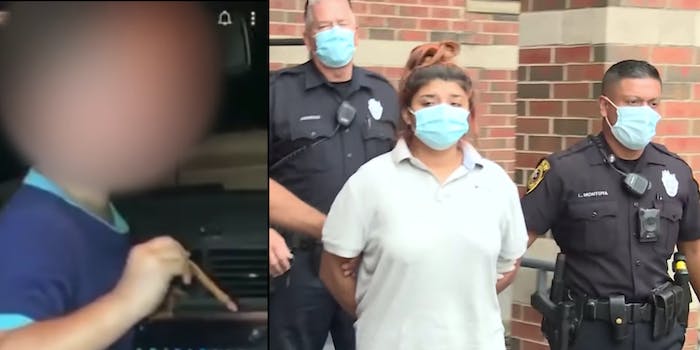 The video shows the boy getting sick. She and her boyfriend were charged with child endangerment.

A Snapchat video capturing a toddler smoking marijuana led to the arrest of his sister and her boyfriend, police say.

In the now-viral video, which was later uploaded to Facebook, the 3-year-old is encouraged to smoke marijuana by his sister, Larissa Contrera.

Contrera said her brother was recorded by a man she met outside of her aunt’s home, who brought the drugs into her car.

Contrera and her boyfriend, 19-year-old Thomas Rey Esquivel, then gave the toddler the weed and encouraged him to smoke. The video shows the boy coughing and getting sick. Contrera said she reached out to CPS herself, which led to her arrest.

She and Esquivel were charged with child endangerment.

The video has been viewed over 21,000 times since getting uploaded to social media. The Bexar County Sheriff’s Office learned of the video Monday.

“They thought it was just hilarious,” Sheriff Javier Salazar said during a news conference on Thursday. “You can tell by watching the video that they thought it was the funniest thing ever that this little boy was smoking a blunt and coughing and getting physically ill as a result of it.”

The investigation into the case is ongoing, the Fort Worth Star-Telegram reports. Salazar said he’s certain there will be other arrests.

Officials said the boy is at home and doing well.