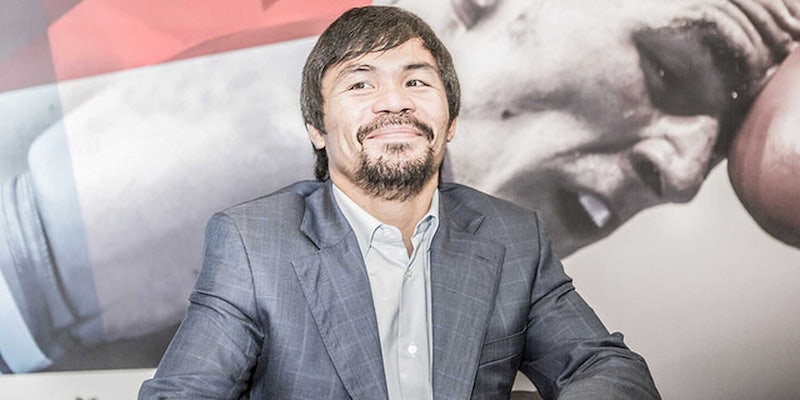 This isn't the first time the world champion has offended the LGBT community.

Manny Pacquiao is one of the most rich and famous athletes in the world. Along with his success in the boxing ring, he is also known for making comments insulting the LGBT community. Today, the 37-year-old boxer apologized for comments that same-sex desire makes man “worse than animals.”

Pacquiao is a member of the Philippines house of representatives and is running for a senate seat in May. In a recent TV interview for local station TV5, the former world champion was talking about the upcoming election when the conversation turned to homosexuality.

“It’s common sense. Will you see any animals where male is to male and female is to female?” Pacquiao asked the interviewer. He continued: “The animals are better. They know how to distinguish male from female. If we approve [of] male on male, female on female, then man is worse than animals.”

LGBT allies and advocates immediately responded to Pacquiao’s comments. According to the BBC, a local gay rights group called Ladlad called on voters to not vote for Pacquiao in the election.

The LGBT is a group of people. We are humans. But not animals. Though we're no saints we will pray for Manny Pacquiao.

The boxer got the message loud and clear. Today, he took to Twitter and Instagram on Tuesday to apologize for the hurtful comments.

In the video message posted to both platforms, Pacquiao said:

Aside from being offensive to the LGBT community, Pacquiao’s comments about sex were patently false. There are many species in the animal kingdom who have homosexual relations, like flamingos, dolphins and penguins.

This isn’t the first time Pacquiao made offensive comments about LGBT folks. Back in 2012, he stated his opposition to President Obama’s call for the legalization of same-sex marriage. According to the interview, he also cited a passage from the book of Leviticus, which says that homosexuals should be “put to death.” But he later denied he said such a thing.

“I didn’t say that, that’s a lie. I didn’t know that quote from Leviticus because I haven’t read the Book of Leviticus yet. I’m not against gay people. I have a relative who is also gay. We can’t help it if they were born that way,” he said, according to TMZ. “What I’m critical off [sic] are actions that violate the word of God. I only gave out my opinion that same sex marriage is against the law of God.”

Despite Pacquiao’s latest clarification and apology, it may not win any LGBT hearts–or votes.

Manny said sorry. Apology accepted. But i will still not vote for him. Manny for boxing not for Senate. #Respect

Update 3:15pm CT, Feb. 18: After his controversial comments about gay people, Nike has terminated its relationship with Pacquiao. According to the New York Times, the company issued the following statement:

“We find Manny Pacquiao’s comments abhorrent,” Nike said in a statement. “Nike strongly opposes discrimination of any kind and has a long history of supporting and standing up for the rights of the LGBT community.

“We no longer have a relationship with Manny Pacquiao.”