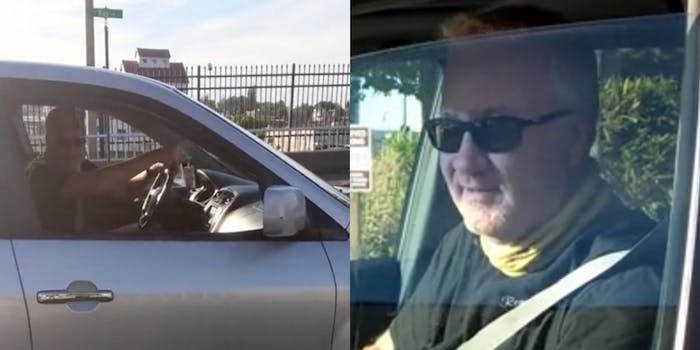 Video: Driver allegedly almost runs over man walking dog before threatening to beat him up

'My dog was almost killed.'

After a pedestrian flipped off a driver who allegedly almost hit him and his dog, the driver threatened to beat him up and tried to claim he was the one who was threatened.

The now-viral incident, recorded by the pedestrian, occurred in Washington State and was posted to Reddit by the pedestrian on Monday. The pedestrian said he and his dog were trying to cross the crosswalk at the time and that the driver failed to yield to them, almost hitting them.

“My dog was almost killed,” the pedestrian, under the username gradyjellyneck, said in a comment on the post. “I think an expressive hand motion is warranted.”

The pedestrian claimed in another comment that the driver wasn’t headed in the same direction as he was. He alleged the driver pulled an illegal U-turn just to approach him, after which he started recording.

“Pretend to take a photo because you’re a big p*ssy. I’m gonna kick your ass up here,” the driver says in the video before pulling into a parking lot down the street. The pedestrian tells him to do it.

After the driver parks, he rolls down his window and holds up his phone as if he’s recording.

“Hey, dude, why’d you threaten me out there?” he says.

“I have a video of you saying you’re going to get out and kick my ass,” the pedestrian responds.

“OK, well then I flipped you off for no reason, for my First Amendment right, so go fuck yourself,” the pedestrian responds. The driver claims this is another threat.

“Threaten? Are you threatened by free speech, sir?” asks the pedestrian.

“You’re shaking,” the driver says. “You’re shaking like a leaf.” The pedestrian then claims that he plans to post the video on Bellingham Living, a private Facebook group for those who live in the area.

“Your dog doesn’t like you,” the man appears to say, though his words are muffled as he closes the car window, before driving off.

The pedestrian posted the video to the r/PublicFreakout subreddit, where many were astounded at the driver’s rage.

“Flipping someone off is a threat?” one user asked.

“I felt a wave of rage wash over me as soon as he tried to claim for his camera HE was the one that was threatened, and (then) my man calls that bullshit out, which is when he proceeds to pivot to ‘you threatened me by flipping me off,’” another user said.

“I love these people getting called out, but just a reminder it’s not a great idea even when you know (you’re) right,” a third said. “You never know what someone is going to do. (Too) many crazies, it’s not worth it.”

Others noted that the driver could have easily apologized once he pulled over.

“He pulled up, realised he was completely in the wrong and caught bang to rights,” one user said. “That was the time to just say ‘you know what man, I apologise.’”

“‘Hey, sorry about that, didn’t mean to almost hit you, I’ll pay more attention,’” another said, suggesting another way the man could have responded to the pedestrian.

In a comment on the post, the pedestrian said he called the cops and would be following up with them the next day.

The Daily Dot reached out to the pedestrian for comment and was unable to contact the driver.