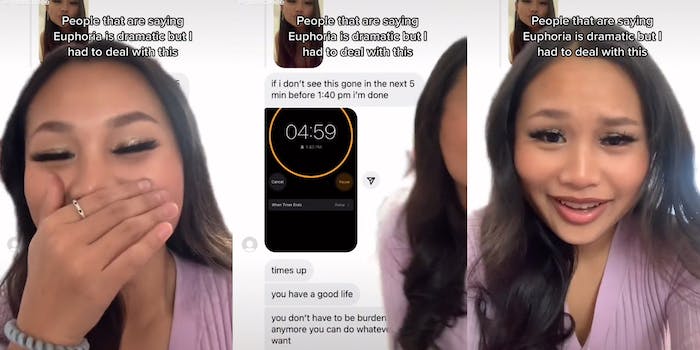 ‘Why are guys so entitled’: Man threatens to break up with TikToker if she doesn’t take down a selfie from Instagram Story

In a now-viral video, a TikToker features a screenshotted message from her now ex-boyfriend demanding that she remove a selfie from her Instagram Story.

The clip, posted by Htee (@hteesheee) this week, shows a direct message from her boyfriend saying, “if I don’t see this gone in the next 5 min before 1:40 pm I’m done.”

He then sends her a screenshot of a timer counting down. Five minutes later, he sends another message reading, “times up. You have a good life. You don’t have to be a burden with me anymore you can do whatever you want.”

“People are saying Euphoria is dramatic but I had to deal with this,” text on the clip reads.

The clip has over 656,400 views as of Thursday, with commenters outraged at her ex’s demands.

“Literally what was even wrong w the picture,” another said in a comment liked by Htee.

“Please not the timer. Would’ve asked him to make it shorter to get it over with,” a third wrote.

“I relate to this except the timer was him threatening to post spicy content of yours truly,” one user wrote.

“I really let guys control who I talked to and what I posted when I was a teenager,” another said. “It angers me so much to even think of it now.”

In a follow-up video, Htee claims that her ex made multiple TikTok accounts just to keep tabs on the content she is posting about their relationship.

The Daily Dot reached out to Htee via Instagram direct message.