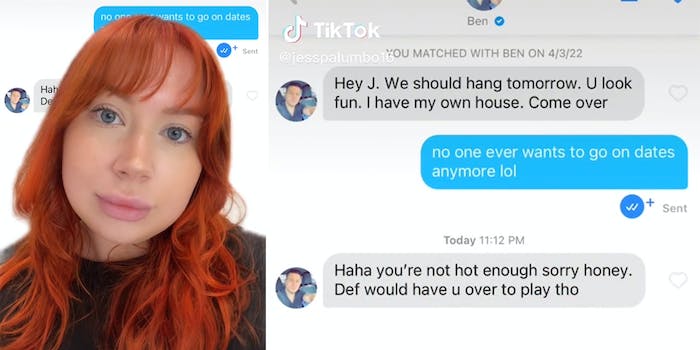 ‘Def would have u over to play tho’: Man tells Tinder match she’s ‘not hot enough’ to take on a date

'The audacity is so ungodly high.'

A TikToker’s interaction with a Tinder match has her sarcastically declaring that she “loves the dating scene.”

Jess (@jesspalumbo16) revealed her Tinder match told her she’s “not hot enough” to take on a date but that he would still have her over “to play.” In Jess’ video, she features a screenshot of her conversation with a man named Ben.

The conversation, according to the screenshot, begins with Ben asking her to come over to his place because he has his “own house.”

“No one ever wants to go on dates anymore lol,” she responds.

And his response has viewers gobsmacked by his audacity.

“Haha you’re not hot enough sorry honey,” Ben says, according to the screenshot. “Def would have you over to play tho.”

The video features Olivia Rodrigo’s “All I Want,” specifically the lyrics, “I found a guy, told me I was a star.” The sound is often used on the platform to call out horrible things men say to women.

The video was posted on Wednesday and garnered 340,000 views.

It even prompted a response from Ben, who, according to Jess, reached out to her to tell her that someone is impersonating him. Jess pointed out that this makes little sense as his Tinder account is verified, which means he had to take a selfie on the spot in a very specific pose to prove he, the user, matches the photos he’s using.

Jess said he also “told [her law enforcement is gettin [her].”

Viewers mocked the man and others like him, questioning the audacity it takes to speak to someone like this.

“Why do they think they can talk like this?” one questioned.

“What grown man says ‘have you over to play,'” another said. “We playing hop scotch or what? Bye.”

“The audacity is so ungodly high,” another claimed.

In a follow-up video, Jess features the man’s Tinder profile.

The Daily Dot has reached out to Jess via Instagram direct message and to her Tinder match Ben via the company listed on his Tinder profile.