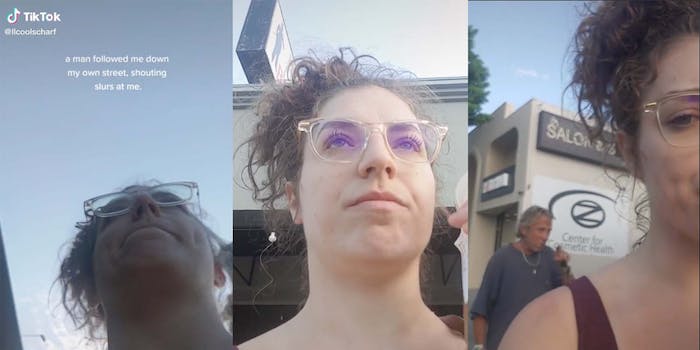 Video: Man follows TikToker, tells her she ‘better not be f*cking Jewish’—then accuses her of following him

The man was caught harassing the TikToker on her birthday.

In a video posted to TikTok, a woman is seen being harassed by a man who called her a “c*nt,” among other things, in public.

The video was posted on July 13 by TikToker Lauren Scharf (@llcoolscharf).

“You’re the most nastiest fuckin’ lady. Please tell me you’re not Jewish,” the man says to Scharf in the video. “You better not be fucking Jewish!”

The TikToker captioned the video, “happy birthday to me,” implying it was her birthday at the time.

Scharf asks the man to “please leave [her] alone” multiple times. “I’m literally just walking down the street,” she says. Scharf wrote in the video that the man followed her on the street she lives on.

Scharf told the Daily Dot that the man began to follow her about half an hour before she even started filming. His first remark to her allegedly was “Can I tell you a [N-word] joke?” which he yelled at her from across the street.

“I knew just from that to keep walking and not engage,” Scharf said.

She said he then crossed the street and told her she had “nappy [N-word] hair” and “nappy Jew hair.” Scharf went inside a store to get away from the man, she said, but he allegedly waited for her outside. That’s when she began filming.

In the video, the man is seen telling another woman standing nearby that Scharf was the one following him. A second man stands nearby watching the entire interaction.

“I have video of you following me. Please leave me alone,” Scharf tells him.

Shortly after, Scharf says in the video that the man charged at her and that she jumped away so he wouldn’t be able to touch her. She then crosses the street.

“Fortunately, once I crossed the street that was the end of it,” Scharf said.

Scharf hashtagged the video with both #StreetHarassment and #AntiSemitism.

The video’s comment section is filled with support for Scharf, as viewers applaud her for keeping her composure during the interaction and express frustration that the only person who came to Scharf’s aid in public was another woman, not another man seen standing nearby.

“To the men who are saying ‘Oh well there’s no point in helping y’all will say all men anyway,'” begins a comment from TikTok user @CozyGoblin,

“If that’s the only reason you don’t help people getting harassed by men then your priorities are fucked up.”