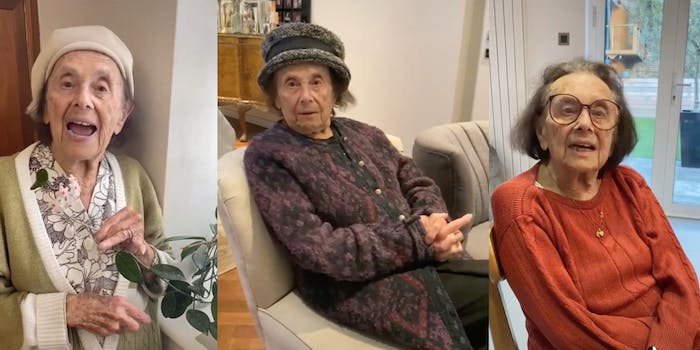 'We will not allow this to stop us from educating about the horrors of the past, and what hatred can lead to.'

A 97-year-old great-grandmother who survived the Holocaust is being harassed with antisemitic hate speech on her popular TikTok account.

The Campaign Against Antisemitism noted in a statement earlier this month that Lily Ebert, who was held captive at the Auschwitz concentration camp during World War II, has been “bombarded” with comments endorsing Nazi German leader Adolf Hitler.

“#Holocaust survivor’s [sic] Lily Ebert’s @tiktok_uk account, dedicated to asking questions and sharing answers about the Holocaust, was bombarded during #Shabbat with comments praising Hitler,” the group wrote. “Not one of the Tiktoks has been political nor mentioned #Israel.”

Many of the remarks appear to have been sparked at least in part by the recent conflict between Israel and Palestine. The fighting, which ended with a ceasefire on Friday, led to the death of 248 people in Gaza and 12 people in Israel.

“[A]sk her if she thinks the treatment of Palestinians reminders her me [sic] the treatment she got in the camp,” TikTok user ericssonsatio said.

Others left comments such as “Happy holocaust” and “Peace be upon Hitlar [sic].”

Ebert’s great-grandson Dov Forman also weighed in on the matter, noting that he had been targeted with antisemitic comments as well.

“Over the past few days my great Grandmother (Auschwitz survivor) and I have continued to receive messages of hate on TikTok and Twitter,” Forman wrote. “We will not allow this to stop us from educating about the horrors of the past, and what hatred can lead to. Hate only breeds hate.”

As noted by the Independent, antisemitic incidents have reportedly risen in the U.K., where Forman and Ebert live, by 500 percent since May 8.

But Forman says his great-grandmother, who also recently overcame the coronavirus, is a “fighter and survivor.”

Taken to Auschwitz from her home in Hungary in 1944, Ebert was liberated from the death camp two years later in 1946.

Ebert currently has 10 grandchildren and 34 great-grandchildren, according to the Auschwitz-Birkenau Memorial and Museum.