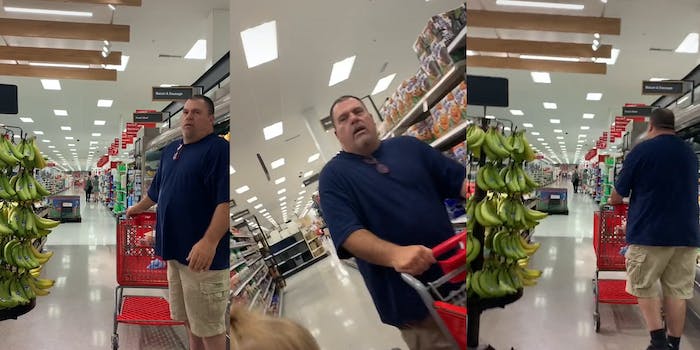 ‘He was zooming in on their bodies. It was gross and needed to be called out’: Mother says man was taking pictures of teenage girls at Target

'As a mother of a teenage daughter- thank you.'

TikToker @momoftwowithone posted a now-viral video where she recorded a man while shopping at Target who she claims was taking pictures of teenage girls.

“Do you know this guy? Saw this guy blatantly taking pictures and videos of teenage girls in their shorts at my local @target,” she wrote in the caption. “Security and managers couldn’t (wouldn’t) do anything and he booked it when someone mentioned the police.”

@momoftwowithone Do you know this guy? Saw this guy blatantly taking pictures and videos of teenage girls in their shorts at my local @target Security and managers couldnt (wouldnt) do anything and he booked it when someone mentioned police. #creep #karen #target #fyp ♬ original sound – JJ

“Caught this guy following and taking pictures of a group of teenage girls,” the overlay text reads.

In the clip, she accosts the man as he tries to walk away. “You have pictures of children on your phone that’s not OK!” she tells him. “That’s disgusting, you can’t take pictures of underage girls in the store. That’s not OK.”

She then turns to other customers at the Target location. “He was taking pictures of underage girls and he’s walking away because he’s embarrassed,” she says.

The man says something along the lines of “that’s not true.”

She responds, “Then show anybody your phone. Because you were taking pictures and videos of teenage girls in shorts!” she yells at him. “I’m not wrong. I saw the whole thing. If you’re going to take pictures of other people’s children in stores you should be embarrassed. Show me your phone, then.”

The man responds, “Why would I show you my phone?”

“Because if you don’t have pictures of teenage girls on your phone then you should be willing to show,” she replies.

The man then asks again why he would show her his phone.

“Because you’re being accused of something serious. If you didn’t do it then it would be no problem. But you know you did and I saw you do it. You saw me see you do it and you started walking away,” she says. The video then cuts to the man walking away from the TikToker.

The creator provided further context in the comments section on the situation, stating that she “asked if [the girls] knew him because he was taking pictures of them and the look on their face when they said they didn’t made [her] pop off.” She also wrote that he was following the girls for so long that she thought he was their dad at first.

Some TikTokers asked why she would follow the man when she had her own child with her in her shopping cart. She replied in the comments that she “felt perfectly safe” as they were in a crowded store in the middle of the day. She addressed several other comments in a series of follow-up TikToks pertaining to the incident at Target.

“Secondly, if I didn’t do what I did and no one else had [seen] him then he would’ve just gotten away with that,” she explains. “Who knows how long he’s been doing that?”

In a follow-up clip, the mother says the man was zooming in on the girl’s bodies while taking the photos and doing “creepy shit.” She says by the time they got to the front of the store, security was already waiting for him.

The man allegedly refused to show anybody his phone and simply abandoned his cart and left the store. the TikToker says Target management said they would “handle it” but she wasn’t convinced.

“Hopefully someone knows who this is so something can be done,” she says in another clip.

While on public property, individuals generally have the right to photograph or video whoever they please. Free Advice’s Legal section on “child photography” states the following: “There is no special rule for children. Children do not have more privacy rights than adults. In theory, they have the same right to privacy, while in practice they probably have less of a right to privacy.”

However, since this is in a Target store, then that would mean the photographs and videos were taken on private property. This means that it would most probably be up to the retail establishment to tell customers to stop snapping pictures and recording video clips of people, as they own the business the shopper is patronizing.

Labor Attorney Michelle Murtha commented on photography within the confines of a store: “Yes and yes. Technically, it is LEGAL to take those photos in that it is not illegal to take them. That said, the owner of the property can set whatever rules they want to control the use of their property.”

The TikTok, however, raised an ethical debate and many of the commenters believed that just because something isn’t illegal doesn’t mean that it is necessarily “right” to do, especially when it comes to children’s safety.

Many folks who saw the TikToker’s video urged them to call the police, while others thanked the woman for looking out for the teens and putting the man on blast.

“Expose them all day everyday,” a top comment read.

“Yess be loud! Cause a scene! Embarrass them,” another encouraged.

“Thank you for being LOUD and standing up for someone else’s baby,” one user wrote.

“As a teenage girl who’s mom wouldn’t stand up for me like this , thank you!” one viewer wrote. “You are setting an example of the right thing to do!”

The Daily Dot has reached out to @momoftwowithone on TikTok and Target via email.