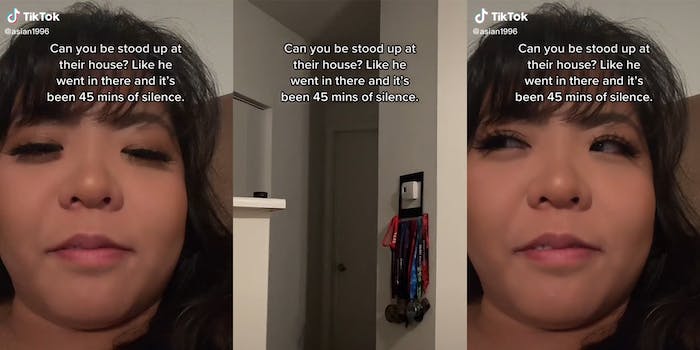 ‘I’ll wait for 30 more mins then I’ll leave lol idk where he went’: Man stands woman up while she is at his house

'Like he went in there and it's been 45 minutes of silence.'

Being stood up by a date is never a fun experience. You take the time to chat with a person you’ve probably got at least a modicum of interest in, get ready, and meet them at an establishment. But you wait and wait, and they never show up.

However, have you ever been stood up at someone’s house (not waiting outside in the car to pick them up, but after you’ve been let in)?

That’s what Hannah Lee (@asian1996) says happened to her. Lee filmed a short video of herself while seemingly sitting on her date’s couch with a text overlay that reads: “Can you be stood up at their house? Like he went in there and it’s been 45 minutes of silence.”

“I’ll wait for 30 more mins then I’ll leave lol idk where he went,” she added in the caption of the video, which has been viewed 3.3 million times.

The clip ends with her zooming in on the door to the room that he purportedly went into.

Viewers who commented on Lee’s experience shared their own thoughts as to what could’ve happened. Some attributed her date’s disappearance to a very restroom break, as they suffer from lactose intolerance. Others said that he simply got caught up in browsing Reddit for too long.

There were some who speculated that he was on the phone with his girlfriend, or that he might’ve just had a “panic attack” because someone was over his house. This is something Lee, herself, revealed she did (hid in a room) when she threw a house party and “too many people showed up.”

Others said that it was a not-so-subtle hint he wanted her to leave.

Some came up with revenge strategies that Hannah could employ, like taking the remote control for her date’s TV. “He will forever be looking for it,” one said.

Others questioned why Lee stayed for so long.

“So he gone for 45 minutes and you didn’t already leave, and then you’re staying an extra 30?” one asked.

“After 10 minutes you check in. Any longer you just go home,” another said.

“You sat there … for 45 minutes?” another questioned.

So what happened with Hannah and the dude? Well, as it turns out, she reveals in a follow-up she finally went into his room and found him laying on his bed, naked. In a follow-up, she says the two of them were supposed to go out, but he apparently wanted to get it on before they did anything else and figured that just waiting in his room without any clothes would get her to come to him.

When asked whether or not if it “worked,” Hannah said: “Yes but no but yes kinda.”

“I just dont understand what made him think that was a good idea,” she added in the caption.

The Daily Dot has reached out to Hannah via TikTok comment.