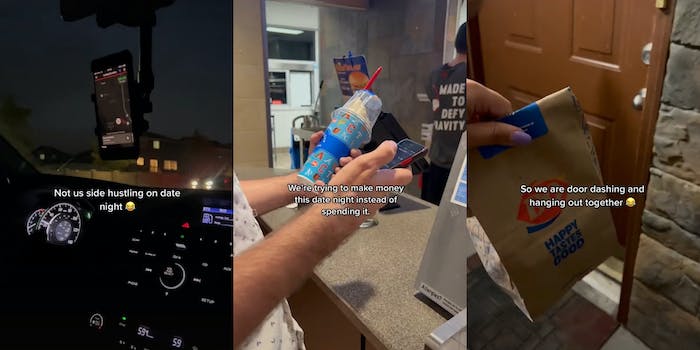 ‘That’s not a date night. That’s a job. Call it what it is’: Couple works for DoorDash on their date night, sparking debate

"It’s cute until you realize the capitalist nightmare of a couple having to work on a 'date night.'"

A woman shared in a now-viral TikTok that she and her husband spent their date night working for DoorDash. “If your man won’t hustle with you dump him,” she urged viewers.

In the video, Jack and her husband stop at Dairy Queen, pick up the order, and deliver it to the customer’s house. “We’re trying to make money instead of spending it,” the text overlay reads. “So we are door dashing and hanging out together.”

“You get creative 4 years into marriage,” Jack added in the comments section.

The video sparked quite the reaction from viewers. Some argued that the date wasn’t a real date since the two were working, and one even called it a “capitalist nightmare.”

“It’s cute until you realize the capitalist nightmare of a couple having to work on a ‘date night’ just to earn more money,” they wrote.

“That’s not a date night. That’s a job. Call it what it is,” another argued.

Others critically pointed to the pay DoorDashers get. “Literally chasing that dollar cause that’s all they pay out,” one quipped.

According to DoorDash’s site, workers make a base pay that is dependent on “estimated time, distance, and desirability of the order.”

Jack revealed in the comments section the couple doesn’t make a ton working for DoorDash together. Jack also revealed she and her husband take turns running point on deliveries and make around $50 a night.

“We ain’t making much but it is paying for a full tank of gas whenever we do it. To use, that’s a big help rn,” she said, referring to the high gas prices the U.S. is seeing.

Not all viewers were critical, though.

“You go! That’s such a cute idea!” one person said.

“Lol. This what real couples do!!” another person concurred.

Jack and her husband are apparently not the only couple who have spent quality time working for DoorDash together.

“My bf and I have done this multiple times just for fun,” one viewer said.

“Honestly my fiancé and I have the most fun doing this ! We also have so many deep conversations I love it !!” another agreed.

The Daily Dot reached out to Jack via TikTok comment.