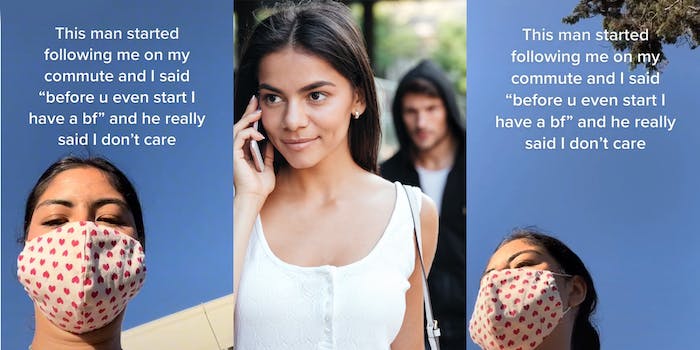 ‘He followed me and didn’t take no for an answer’: Man won’t stop harassing woman on the street, says he ‘doesn’t care’ that she has a boyfriend

A viral TikTok shows a man who won’t stop harassing a woman on the street. The comments section of the video lit up with people agreeing on how “entitled” he was.

Yula (@princessangelfairy) posted the clip on Sunday with the text overlay reading, “This man started following me on my commute and I said ‘before u even start I have a bf’ and he really said I don’t care.”

The clip shows Yula walking down the street with a mask on, and although the footage doesn’t show the guy allegedly harassing her, he talks as he follows her.

“I just want to get to know you, I don’t really care about your history, your present, or your past,” he says. “You may actually have a lot of situations going on.”

“I really do,” she replies.

“Just like I could be having a lot of situations going on,” he says.

“I think that us being friends or whatever shouldn’t stop that situation but I don’t know, it’s weird,” he says.

Then he says, “Bottom line is, how has your day been?”

“Can we just start right there?” He asks. “You got me all tongue-twisted. I don’t know how to do this shit. I got no game.”

Yula politely tries to imply she doesn’t want to talk to him. Eventually, she stops walking and tells him “[hope] to see you again” and to “have a good one.” It seems at this point that the man finally leaves her alone.

In the caption, she wrote that the incident was “disrespectful” and “weird asf.”

As of Thursday, the clip has over 418,600 views and more than 1,000 comments, several of which blamed Yula for telling him “hope to see you again.”

In the comments, Yula wrote that “the victim-blaming and shaming is seriously out of control in these comments y’all are part of the problem.” She added in another comment that she felt she “had to record for my own safety.”

“Men can’t read your mind ladies. If you’re not interested, just tell him so and ask him to leave you alone. If he continues, call the cops,” one viewer commented.

“Some of you forget the amount of women killed from rejecting men, you literally have to be so nice to ensure your safety at times,” another user argued.

Most commenters sympathized with Yula.

“You gave him 4 hints to be left alone and he felt entitled,” one wrote.

“Guys really do this and be like that prolly made her day,” another TikToker commented..

“Never trust a man who says ‘trust me,'” another wrote.

Unfortunately, Yula’s experience is all too common. According to a 2,000-person survey conducted in 2014, about 65% of all women in the United States have experienced street harassment, including being touched and followed.

The Daily Dot reached out to Yula via TikTok comment for this story.