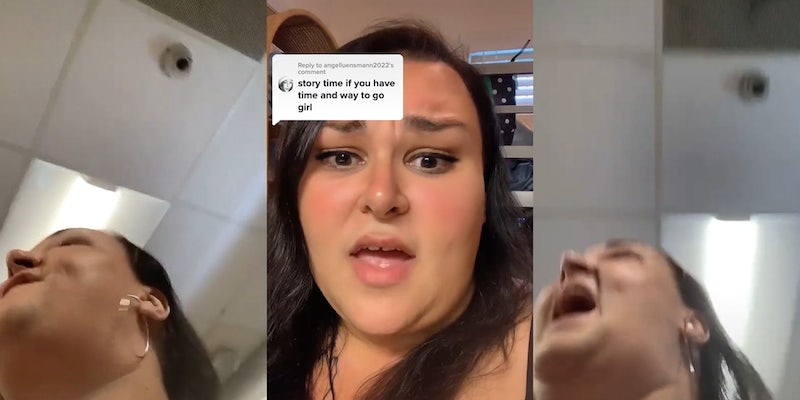 ‘Men in general…just need to do f*cking better’: Gas station employee defends young coworker against man who was harassing her

'Normalize screaming at men who are out of line.'

A TikToker has gone viral after sharing a video of themselves defending their coworker against a customer who was harassing her.

In a video posted by user Whitney (@sadgirlyhouroffical), she can be seen yelling at the customer and telling him to leave.

“You’re making her fucking uncomfortable! Leave!” she shouts at the beginning of the video.

“No you are, you stupid bitch!” he retorts.

“Get the fuck out!” she screams. The man then leaves.

The initial video has over 1.7 million views and has inspired several follow-ups. “Man would NOT take no for an answer,” Whitney captioned the clip.

In one follow-up, Whitney explains what happened from her perspective.

To summarize, Whitney was working when she observed a man outside staring at her coworker, which she claimed occurred for around five minutes.

When he eventually came inside, he approached the coworker and said that she was “the most beautiful thing [he’s] ever seen.”

While the coworker politely accepted the initial compliment, the customer went further, asking her questions about her name, age, and personal life. From this point, Whitney notes that the coworker pretended to be “the biggest bitch so he could fuck off,” hoping to dissuade further confrontation.

After the man inquired whether Whitney’s coworker was single, Whitney stepped in, claiming that they were together in order to stop the man from asking any more questions. This did not work, as the man then asked if she “share[d]”—seemingly inquiring if the relationship was open.

Once Whitney said that they did not, “he just looks her dead in her fucking soul, and leans in fucking closer and says that he is going to fucking desecrate her,” she claims.

This set Whitney off, leading to the events seen in the initial video.

In an additional follow-up TikTok, Whitney says that she transferred stores and did not report the initial incident to the police as “cops down there don’t do nothing.”

“Last time I called them, they acted like it was such an inconvenience for them to come to my safety,” she recalls.

Thankfully, she says she is enjoying work at her new location and is complimentary of her new co-workers, her customers, and the police officers who serve the new location.

Commenters under the original video were thankful for Whitney’s actions.

“Normalize screaming at men who are out of line,” one user wrote.

“Thank you for standing up to this guy instead of just filming him,” another added.

Update 8:09am CT, Aug. 11: In an Instagram DM exchange with Whitney, she elaborated on the story and safety in her workplace.

“I just honestly wish men—not all men, I know, but [they should] keep in mind that this our workplace. I’m here to work. We’re here to work. We’re not here to make friends,” she explained. “We understand that we’re part-time therapists there, because sometimes people need to vent and just let it out, because [they] know you’re a stranger and you’re not going to see them again, probably.”

However, she noted that “venting” does not excuse the man’s behavior, and that plenty of people in her position face violence beyond what her and her coworker experienced.”There was another news article…A woman got shot in Biscoe, that’s our other sister location. She did everything that she did right…and still got shot three times in the chest,” Whitney said. “It’s ridiculous that me and everyone else that works in the convenience store has to live in fear of getting shot, or worse…”

She also noted that, while much of the response has been positive, she received some criticism and wanted to explain the difference between what her co-worker experienced and everyday gender-related issues.

“I had received a comment under the post…a man saying, ‘that’s like saying all women are whores,'” she said in reference to her earlier comment about men needing to do better. “I had to tell him, being sexually harassed and having your heart broken is not the fucking same…If you have been touched the wrong way or someone’s grabbed your chest or your junk, then you’ve been sexually harassed, but you getting your heart broken by a woman is not the same as getting harassed like some of my female coworkers have.”

“…That shit’s ridiculous,” she concluded. “You can’t even compare it like that.”