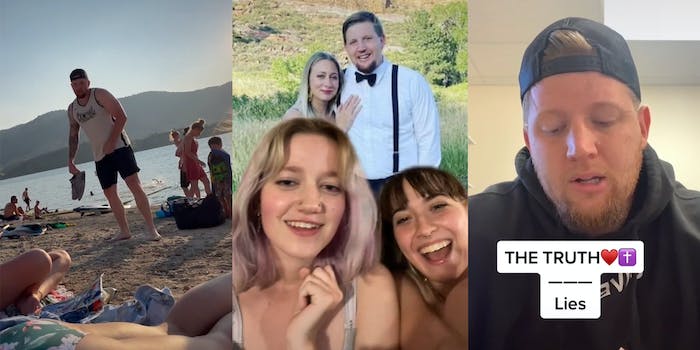 ‘I will continue to fight for truth’: Man who harassed women on beach for wearing bikinis fired from Christian company

He maintains that policing women's clothing is God's will.

The man who went viral on TikTok for accosting bikini-wearing college students and preaching that their bodies are pornographic has been fired from a Christian construction company.

Logan Dorn, who first came to the internet’s attention when one of the women posted footage of his harassment on her TikTok account, defended his actions by claiming he was filled with “righteous anger” and a “boldness by the Holy Spirit.”

In a TikTok he posted to “tell his side of the story,” Dorn confirmed the 18-year-old’s version of events and justified his behavior by equating women’s bodies with pornography, something he says “destroyed him” after exposure to it at a young age.

According to Dorn, women’s bodies being visible in public is damaging to everyone who sees them, especially children. He said he believes that by shaming women and telling them to cover up, he’s acting in accordance with the will of God.

After receiving considerable pushback, Dorn released another video in which he said that he had nothing to apologize for and objected to people “berating” him over his choice to berate a group of strangers for what they were wearing.

He even speculated that continuing to harass women, though he doesn’t recognize it as harassment, for not dressing according to his faith-based preferences might be his divine calling. He said that “more godly men” are needed to police women’s clothing choices in what he believes to be a corrupted world.

However, not all Christians agree with Dorn’s stance on women, doctrine, and proper interactions with other human beings, including the Christian construction company that up until recently employed him.

After learning about Dorn’s actions at the beach, Mighty Hand Construction, which cites Christian principles and foundations on its website, launched a same-day investigation. The investigation resulted in Dorn’s “immediate termination,” the company said in a statement posted on Facebook.

“Mighty Hand Construction does not condone Logan’s behavior in the videos, nor do his actions reflect our values as a company,” the statement said. Mighty Hand strives to be a place of business where all are treated with utmost respect and acceptance, and actions by our employees which go against those values will not be tolerated.”

Since being fired, Dorn posted another TikTok with a text statement accompanied by Christian worship music about standing strong in the face of storms. In the statement, he reaffirms his belief that he acted in accordance with God’s wishes, stating that he will “continue to stand for Jesus and the Gospel.”

“I will continue to fight for truth, righteousness, purity, and hold the line,” he wrote, adding a promise to respond to “the women at the beach as well as the ‘whole world’ soon.”