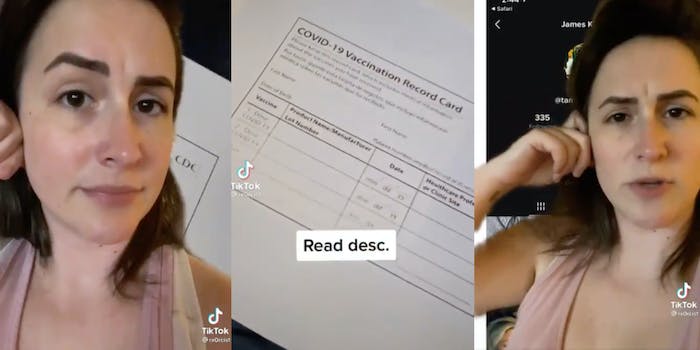 'Now James, do you really think it’s smart to advertise that you not only forged medical documents but also have the intent to distribute them?'

A Florida man was reportedly terminated from his job after a TikToker put him on blast for his video in which he advertises “selling blank Covid Vaccine cards.”

TikTok user @rx0rcist, who Axios identified as Savannah Malm, shared a video exposing a man, who Axios also identified as James Koncar. Koncar’s TikTok account, under the handle @tamparockout17, was not available on Tuesday evening when the Daily Dot ran a search for it.

Koncar’s video, in which he detailed his plan to sell fake vaccine cards, was also unavailable. However, according to the snippets shown in Malm’s video, it appears he is an anti-masker.

He included the hashtags #snowflake, #republican, and #conservative.

Malm’s video features screenshots of Koncar’s video, his TikTok account, and his LinkedIn account, which was also unavailable on Tuesday evening.

“Now James, do you really think it’s smart to advertise that you not only forged medical documents but also have the intent to distribute them?” Malm asks in the video.

Then, she shared a screenshot of Koncar’s LinkedIn account, which says he is an internet marketing and medical specialist at thirteen05 Creative.

“Did you not learn how to not commit multiple felonies and then put it on the internet as an internet marketing specialist at thirteen05?” she asks, pointing to his employer.

She then points to a video he reportedly posted earlier in which he referred to a Black woman doing spoken word poetry as “another dumb bitch who turns her comments off.”

Malm told Axios she took her TikTok video down at the request of thirteen05 Creative. Her video, however, was shared by author Mikki Kendall on Twitter, where it has been viewed more than 200,000 times.

The video was posted to Twitter on Friday. On the same day, the company thirteen05 Creative tweeted that the “employee” was suspended and that there’s an ongoing investigation into the allegations.

Less than 30 minutes later, the company announced “this employee has been terminated as we have concluded a swift review of his actions.”

A day later, the company revealed that it is looking to “immediately” hire an SEO specialist in the Tampa area.

Some are shocked that Koncar thought he could post something of that nature to TikTok without thinking he would face repercussions. But most are cheering Malm on for this and her past work of exposing people, including the pharmacist who is accused of intentionally destroying 570 vaccine doses in December.

The Daily Dot has reached out to Savannah Malm and thirteen05 Creative.