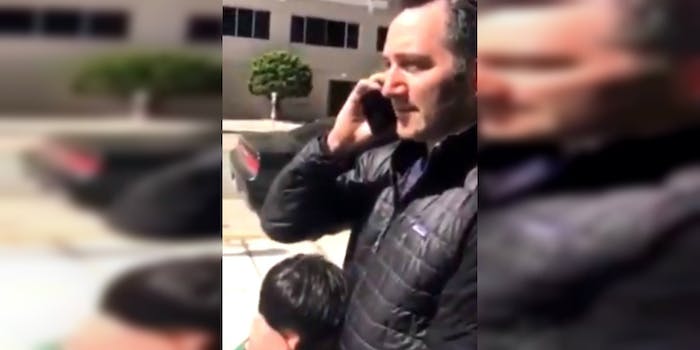 The man’s child begged him to stop.

Yet another white person has gone viral for calling 911 on a Black person when an inter-personal matter did not seem to warrant bringing in law enforcement.

This time it was an engineer who was reportedly waiting for his disabled friend to meet him outside her apartment in the Bay area, reports Raw Story. The video picked up steam on social media over the weekend.

From what can be pieced together from the videos the Black man took of the white man calling the police, he tried to enter the building at the same time as the white man, who stopped him and accused him of trespassing. The first video starts with the white man telling the Black man behind the camera that if he has a friend who lives there they can come down and get him. When he responds that his friend doesn’t have to do that, the white man says he’s going to call the police. His son begins begging him not to, saying, “Daddy, don’t, don’t, don’t!”

The Black man patiently records the white man describing him to the police and alludes to the fact that he will be the next white person who becomes famous for calling 911 on a Black person for no good reason. The white man’s son begins crying, saying “Daddy no, please don’t” as his dad ignores his pleas, telling 911 that the Black man is trespassing in his building, even though they’re apparently standing on a public sidewalk. His son starts to cry, “Please, let’s go. Daddy, I don’t like this.”

In a second video, the Black man’s friend shows up and the kid starts pulling on his dad’s arm, yelling, “I told you! Let’s go now! Daddy look what you’ve gotten us into!” The man behind the camera comments that it took her a while to get there because she is handicapped.

Even as his friend who lives in the building stands next to him, the white man stays on the phone with 911, complaining that he refused to identify himself and was trespassing. The video ends seconds after he appears to end the call with the police.

Here’s part 2 of the video.

Neither the identity of the man who called the police or the man who filmed the video has been confirmed. However, Tariq Nasheed of Foundational Black America tweeted the video on Saturday and said that the Bay Area white man has been identified by some as a YouTube employee.