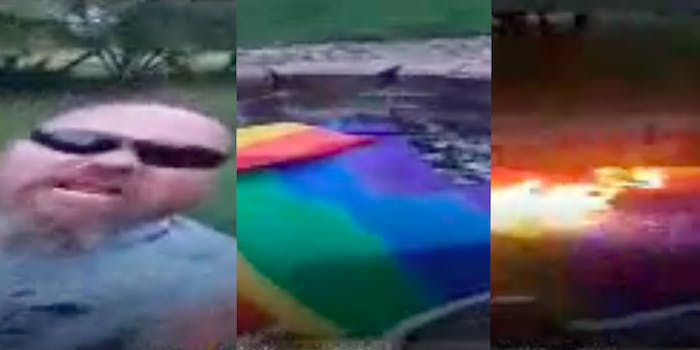 'Burn, burn, burn, you q*eer sons of bitches,' he says in the video.

Darrin Pesall, a man in South Dakota, recorded himself on Facebook Live burning a Pride flag while yelling, “Burn, burn, burn, you q*eer sons of bitches!” He is now facing possible criminal charges, according to Towleroad.

Pesall allegedly stole the flag from a gay neighbor of his, Troy Kriech. The two lived in the same neighborhood of Webster, South Dakota. Kriech later moved to Minneapolis because he claims it is more accepting, according to Towleroad.

Kriech put the flag up during Pride month in June. On July 24, the flag went missing. The video of Pesall burning the flag came across his Facebook feed the day after it went missing.

“Right here, there’s a flag that deserves to be fucking burned,” Pesall can be heard saying in the video as he pours lighter fluid all over the flag. “Right here, we’re burning the fucker. All you pansy-ass fuking q*eer degenerate sons of bitches, watch it!”

Even though the original video of Pesall burning the flag has been taken down, Kriech found a copy of it and posted it to Facebook with the caption: “You think cause you took it down that this just goes away, well it doesn’t. This is not okay and [you’re] not getting away with it. You stole personal property and then did this. Absolutely disgusting and sad. This is a hate crime and [you’re] not getting away with it.”

“I was just disturbed, disgusted–especially coming from someone I know, that they would actually do something that hateful and disgusting,” Kriech told KELO-TV.

“I don’t think there’s a crime itself in the burning of the flag. It’s a crime to steal it and it’s a crime to trespass on property to remove it,” Smeins said.

“In addition, with most crimes, it might be the cover up that is the most serious crime, and that is lying about aspects of the event,” he added.

Pesall apologized for his actions, telling KELO-TV, “It shouldn’t have been done the way it was done. I apologize to the people I offended. It was absolutely totally wrong.” He also compared his actions to those of protesters tearing down confederate monuments.

Pesall said he doesn’t think Kriech should have put the flag up in the first place. “The public display of that type of thing is offensive to me,” he said.