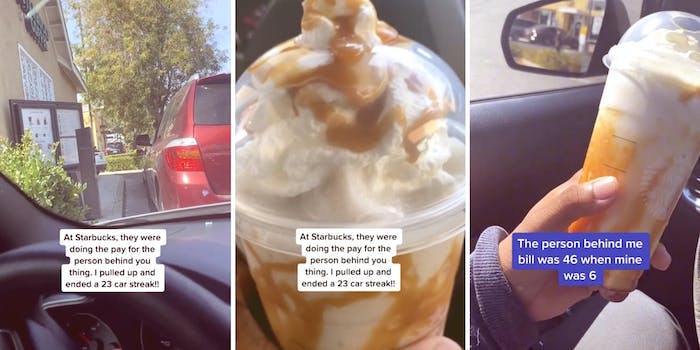 ‘They tried to set me up’: Man breaks ‘pay it forward’ streak at Starbucks drive-thru in viral TikTok, sparking debate

A TikToker broke a 23-car “pay it forward” streak at the Starbucks drive-thru because the car behind him had a $46 bill, sparking a debate on the platform.

TikToker @im_blessed55, who has over 66,200 followers, declined to pay for the customer behind him at the drive-thru, according to his viral TikTok. The 14-second video got over 120,000 views since being posted two days ago.

“How y’all feel about this am I wrong? What would y’all have done?” the TikToker questioned in the caption of the video.

The video shows @im_blessed55 in line at a Starbucks’ drive-thru. A text overlay and text-to-speech effect note: “At Starbucks, they were doing the pay for the person behind you thing. I pulled up and ended a 23-car streak!!”

The “pay-it-forward” phenomenon encourages drive-thru customers to pay for the customer in front of them. While seemingly a well-meaning feat of social engineering, the trend is controversial and has been criticized by Starbucks baristas specifically for being inconvenient.

“As a drive-through employee, my favorite people were the ones who would end these godforsaken lines,” @broccilicheddarsoup wrote.

Others pointed out that they TikToker he could’ve at least paid the equivalent of his own bill.

“I would have put $6 on the order and the responsibility on the next car to keep it going,” @bbbabyshorty suggested.

The Daily Dot reached out to Starbucks via email and @im_blessed55 via TikTok message.