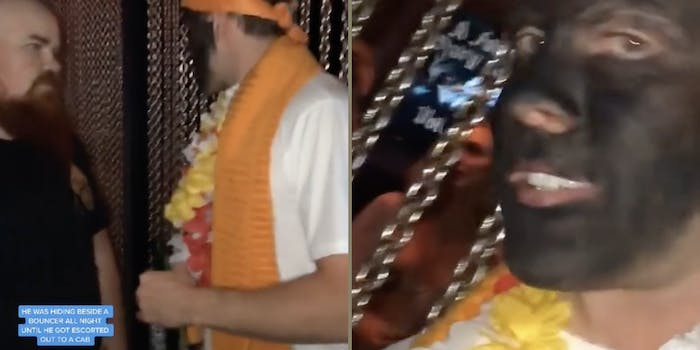 ‘Doing Blackface yourself as a way to mock him is still racist’: Man wearing ‘Trudeau black face’ costume sparks outrage on TikTok

In a viral TikTok, user @ciroc0 called out a white man wearing blackface, allegedly to mimic Canadian Prime Minister Justin Trudeau who has received backlash over blackface and brownface in the past.

The TikToker captioned the post, “Y’all recognize this [clown emoji] that decided to dress as Trudeau black face on Halloween.” His video has over 485,900 views and 26,000 likes since posting Friday.

The TikToker’s video shows a white male at a party with his face blackened while wearing an orange bandana, a scarf, and a lei. A text overlay reads, “He was hiding beside a bouncer all night until he got escorted out to a cab.” @ciroc0 also sticks his middle finger up at the guy in the video.

The creator referenced Trudeau’s repeated use of blackface as the inspiration for the man’s “costume,” but it’s unclear if the white man wearing blackface in the video was specifically trying to imitate any of Trudeau’s offensive outfits.

The video sparked debate in the comments about the intentions of the man’s costume. While some viewed the alleged Trudeau costume as satirical, most commenters pointed out that blackface, regardless of the context, is racist and offensive.

“It’s still Blackface bro. It was fucked no matter who does it,” @lowrider1963 says.

“Mocking Trudeau for his racist costume is funny, actually doing Blackface yourself as a way to mock him is still racist,” sketch_mort says.

“People are seriously wild. A costume mocking someone else does NOT make black face okay. Black face is NEVER okay.. it’s not hard to understand,” @mikimoc says.

The Daily Dot reached out to @ciroc0 for comment.